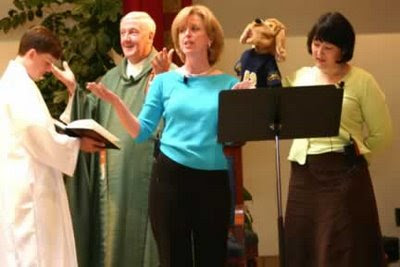 Recently my wife and I were compelled to attend a parish we do not usually attend. It was packed to overflowing, and we made our way back to the cry room (as we often do these days since we have two kids 3 and under). The parish was desperately ugly: architecture from the 1960's, paint and tile that had not been updated since, and lot's of banners, at least a dozen of them. The design was a traditional straight church (though not cruciform), but the altar was moved way out into the center (a recent renovation), which caused the sanctuary to be awkwardly large, and also had the strange effect of trying to attain an ampitheather feel in a recntangular building. Very odd. They had a massive old choir loft, which was used for storage. Up next to the altar, we saw a bunch of music stands, a drum set, amplifiers and electric guitars, and soon the "worship team" was in place and doing their sound check.
As you can imagine, the music was contemporary Protestant praise and worship. The worship team leader was a graduate of Stubenville, so at least the music was in timing and the instruments were all in tune (which is more than I can say about many improvised parish "rock band" worship teams I've seen, where guitars are out of tune, drums too loud and nobody can keep a rhythm.
The interesting thing, however, is that when the music started up, my kids began dancing wildly in the pews. I tried to set them down a few times and tell them how the behave in Mass, but they continued to get up and gyrate around in the pews. I angrily told them that they were going to get in trouble after Mass was over. However, when we got out to the car, my wife remarked that it was not entirely their fault: they are very young, and when they hear heavily rhythmic rock n' roll music, what else are they supposed to deduce other than that they are supposed to be moving around? For them, it is common sense: if you play dance music, you're gonna want to dance. And of course, much Protestant praise and worship was originally composed to be danced to in extremely charismatic parishes of conferences.
This brings up one problem with the Novus Ordo Mass the way it is celebrated in 95% of Catholic parishes: the huge disconnect between what is actually going on and what we profess is going on. How do I explain to my kids that they need to be on their best behavior and piously recollect themselves because the Lord Jesus Himself is about the come into their midst when the music (and I should say, art and architecture) gives a completely different message? The result is that Catholics are forced to engage in a sort of Orwellian doublethink: we must profess belief in the timeless truth of the Sacrifice of the Mass and all the glory that goes along with it while experiencing something vastly different in our practice. Even for those who are able to pull this off, if is disheartening and difficult.
For the conservative Catholic, the answer is that none of this ultimately matters: all that matters is that we receive Jesus, and provided we believe this, none of the externals matter in the least. Of course, I would say that beautiful art and appropriate music make the understanding of Christ's Real Presence come much easier to the intellect. It is hard to focus on Christ's Real Presence as greatly when every other element of the parish is secularized, ugly and banal. Increased recollection of Christ's Presence means we can recollect ourselves better and receive more grace ex opere operantis.
For others, they fall to one side or the other: stop believing in the Sacrifice of the Mass entirely, or else leave and go to a more traditional parish. But the real victims are those like my kids, who are too innocent and simple to engage in doublethink and simply do what the liturgy suggests to them. If it is dance, then they dance. Music and art do not exist in isolation. They have real effects on our dispositions.

By the way, yes, I still got my kids in trouble. They know better than that.
Posted by Boniface at 9:49 AM

I have found it extremely difficult to attend a Novus Ordo Mass. In fact, this past weekend, rather than make the drive to Detroit as I always do, I attended a local parish. I discovered that in the short time I have been away from the NO (about 9 months) and only experiencing the TLM, I have forgotten most of the format for the NO. I found that by praying the Mass from my Roman Missal (1962) that I could get out of this mass what I needed. Well, the only real part of the Mass was the consecration and receiving communion. But I must say that the priest was excellent in his homily. No philosophical mumbo-jumbo, just straight simple truthful explanation. He spoke so that even the young could understand, something some priests forget. It is, in my opinion, a heresy to explain the readings of the mass in a way that places underestanding beyond that of the young and even among some of the elderly. To speak in such a way is vain and prideful. Sins in themselves.

It is quite easy for a Traditional Catholic to succeed in attending the NO without losing one's piety or reverence (although I did forget about the hand shaking pat on the back good ole boy thing). But in the case of children, these churches do cause great difficulty for parents. We talk and here about the destruction of the family by government, secular organizations and society, but these churches are also involved in this same act of family destruction. When a parent's desire and teaching of their child is countermanded by the very religious entity they are trying to raise their child in, the result is family destruction. Begin with the destruction of the smallest one's soul, and the destruction of the family follows.

Priests and parishes of this type need to be openly exposed and attendance should be avoided. We are in a war. The NO group would say this, but i see the majority of their role as aiding the enemy. Deception, misdirection, misleading, self serving, and materialistic. These are what many modernist priests are. And they will talk a good game, deceive many, and destroy the family. Not just the physical families, but the spiritual, as well. Watch for them. They are all around us. Playing the game. Remember, even Satan could quote scripture. Satan has appeared as a Guardian Angel to St Faustina (read the diary). For people to boldly claim that a priest is such a holy man and filled with the spirit makes me look even more cautiously at that individual. It is deception at its best.

I would like to note that the song "lord of the dance" was composed by a protestant who was trying to be "broadminded" toward other religions.
The Hindu deity known as lord of the dance was the deity of dancing, love, and I think, destruction. And even the words of the song are heretical.