Well, I thought I'd heard every single explanation possible for strange liturgical deviations and continued disobedience to the rubrics of the Novus Ordo Mass, but that was until I attened a Mass as a visitor at a parish about fifteen miles south of my hometown this weekend.

Everything about the Mass was pretty normal by NO standards. Songs were from the green Gather hymnal, a bunch of EMHC's up at the altar prior to the fraction rite, holding hands at the Our Father. You get the picture.

But, after Mass, the priest decided he needed to give a little refresher in liturgical rubrics to the people. He got up and started talking about how the Mass was supposed to be oriented towards God and that the worship of God was the ultimate end of the Mass. I thought, "Okay, this is sounding good. Is he going to announce ad orientam Masses?" He then went on to say that, because of this reason, he had installed a giant eye-ball on the rear wall of the sanctuary (where the traditional rose window would be). This big eye (he said) represented the eye of God the Father looking down on the Mass. It was a bizarre looking thing: a big golden triangle with a blue glass ball inside, kind of like a surveillance camera you see at Wal-Mart or something. It actually looked a lot like the creepy pyramid-eye of the Freemasons. It was probably about a foot long and a half of foot wide. He claimed it was the symbol of some religious order, but I went to that order's website and couldn't find any such symbol.

It was kind of like this, only the pupil was a big blue orb and the triangle was solid: 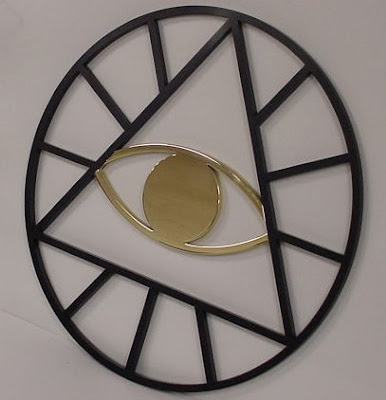 He then added that the rubrics precsribed him to "look up" at many times during the Mass and now he had something to look at. Some people laughed at this: I don't know if he was joking or not.

So, I guess if you are a priest and want to say your liturgy is oriented towards God, just install a big, creepy eye-ball on the rear wall of your sanctuary so that you can stare at it during the Mass.

Sorry I haven't posted ina few days: the Assumption threw me off, but I'll be back next week. Pax.
Posted by Boniface at 8:13 AM

The rubrics say that because the NO actually assumes the priest is saying Mass ad orietam and thus would look up at the crucifix.

Considering the history of the "eye of providence" it is certainly questionable for it's use since in the last couple of centuries has been associated with the Masons. This Christian version uses the pyramid symbol as symbol of the Trinity, but still it is quite creepy looking.

Even dumber to have a symbol of God take precedence over Jesus in the Eucharist.

Animal sacrifice can't be too far away now.

I don't believe that the symbol he installed is allowed as the focal point for the Mass. I believe it has always been a crucifix, with or without the Corpus.

I, too, know of a church (Catholic) that has stained glass windows of modern patterns. In one of them, near the top, is a small emblem not unlike what you have described. If you were to look closely at this emblem, what appears to be the symbol of the eye of the Father is in fact not. It is so closely patterned after the symbol for the Freemasons that if you looked at the older versions of their emblem you would see a striking similarity.

The more we pay attention and see things of this nature, the more one will understand the infiltration of evil and those who stand in favor of it.

I "fairness" to the Masons, I believe (as Jeff Miller pointed out above) that the symbol was originally a Christian one until taken over by the Masons. I have also heard that centuries ago the upside down cross was the symbol of the papacy (Peter being crucified upside down and all that) until the Satanists took it over. Better just to not use either of these symbols anymore.

If a person wants to have a big eyeball, I think that's fine. Lot's of sanctuaries actually feature this symbol somewhere. But the odd part was his explanation that it was somehow in keeping with the liturgical rubrics or something.

Yes, the symbol was. However, the one I am refering to is in a modern church not far from where you are. In fact, it's about 8 miles North of you.

I agree that we should refrain from many of the older symbols. The one we should concentrate on is the crucifix. Sad that many of the churches I remember used to have a large crucifix, some 10 feet tall. Now we are lucky to see one a foot or two in an obscure place.

The symbol of the eye of God the Father is used by the Schoenstatt movement, but it's nothing like what you described. It's on the top of the crucifixes they use in their shrines to indicate the Father's providence even in the place and event that the world thought was the final defeat of God himself. I found their use quite beautiful and moving, but what you described is very odd.

Placed at the peak of the altar is the Father symbol. A triangle symbolising the Trinity and the all seeing eye of God the Father. Schoenstatt is a Father centred movement. Jesus came into the world to announce the good news from God the Father and to lead us all back to his heavenly Father.


does not sound like a blue "globe" to me

This eye looks excatly like the one in your link, only it is gold and blue, not red.