Catholicism in the Yucatan 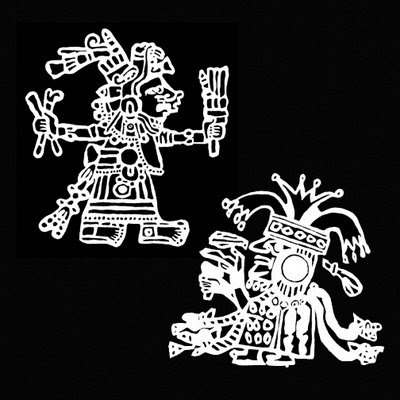 A few months back I read a great book entitled Caste War of the Yucatan by an author named Nelson Reed. It was about the history of Mexico's Yucatan Peninsula from the 1830's right up into the 1950's, centered on a bizarre Indian cult called the Cruzob who mingled their Christianity with Maya paganism and took power in southeast Yucatan from around 1850-1900, killing whites and taking them as slaves. He has an interesting chapter about religion in the Yucatan. The book was written back in the 1950's, but I imagine that a lot of the practices he describes remain, since modern ideas tend to penetrate these remote areas very slowly.
In the following excerpts on religion in the Yucatan, the words Mazehual and Mazehualob refer to the Maya peoples of the region.
For the Mazehual of the Yucatan, the silent forest was not empty; it was alive with spirits, the owners and protectors of the wild places. Before clearing his cornfield, the Mazehual would call out to them, asking permission to use their property; after stating how much land he would need and offering payment in the form of specially prepared corn gruel, he would seal the bargain by erecting a small cross-because, after all, he was a Christian.
...In a cyclical view of life, the seasons and years progress in an orderly pattern., and the past is the key to the future. Most of the Mazehualob had neither the time nor the intelligence to acquire the learning necessary for prediction, and so they consulted an H-men (literally, "he who knows"). The H-Men could find lost articles, cure sickness with herbs and prayers, and read the future by looking into his sacred stones or by counting grains of corn, but his first responsibility and preoccupation was to assist in assuring a successful harvest.
...If August passed and the rains remained poor, worry changed to fear and the farmer faced his most serious crisis. Again, the H-men was ready with an answer, a last resort when other means had failed, a rain-bringing ceremony. All the men of the village would spend several days hunting the wild game necessary for the meat offerings while the H-men went through the prelimenary rites. On the third day after the rites had begun, a presentation was made at an altar built under a ceiba tree. The rain gods were summoned, with great care that none should be omitted, in a ritual invitation to the god of every cistern in the area. As they gathered from their watery homes, called by prayer and lured by offerings of food and incense, boys crouched under the altar croaking as frogs do before rain, branches of the tree were pulled back and forth as if lashed by a windstorm, and a dancer impersonated Kunu-chaak, the chief rain god, with his lightning want and sacred calabash...
The Mazehual of Yucatan prayed much as all Catholics pray; he counted the beads of his rosary, said the Hail Mary and the Our Father, knew the Apostles' Creed and the hymns. He was led in worship by the Maestro Cantor, a native layman who had memorized by rote a stock of necessary prayers in Spanish and Latin and was able to chant them for over an hour without repetition-and often without understanding...The Mazehual was like all other Christians except that when his prayers failed, when in spite of the promised novena crops continued poor or sickness persisted, he could seek help from his H-men and the gods and spirits of the forest. He would pray first to his saint, then to the Balamob [guardian spirit of the village]. He knew that the priests disapproved of these other rites, and that the white men sneered at them, and so he celebrated them secretly, out of sight somewhere in the woods. Naturally enough, he despised the white man as an incomplete Christian.
This book was written in the 1950's and it described a perennial practice of the Indians of the region, so we can't really blame this one on intrreligious dialogue and Vatican II (if these people ever heard of Vatican II). It underscores a fundamental reality that the Church as a whole needs to deal with: for a variety of reasons historical and cultural, the evangelization of Latin America is very shallow and incomplete in a great majority of the rural areas (and I would argue, in many of the cities as well). We need to keep this in mind when people flippantly disregard the de-Christianization of Europe and say, "Well, Latin America is the future of the Church." If it is, then it is grim.
Not to say that if we would have surveyed the Christians of northern Denmark around the year 1100 we would not have foundf a great many remnants of Viking paganism. That is to be sure. The difference is that in the old days, we understood that such things were remnants of paganism and tried to educate the people and get them to stop doing them, and eventually those things died out in most places. Do the current generation of missionaries working among such people actually tell them to stop consulting their H-men and praying to rain gods? I seriously doubt it. In fact, knowing how missions work now, the missionaries probably join the Mazehualob in their rain-ceremony and tell them that it is a valid path to heaven.

This reminds me of "Tio"-worship in the Bolivian silver mines of Potosi. The miners--'devout Catholics' all--go to Mass on Sunday, and offer an idol of the Devil (whom they call "el Tio", or 'uncle' in Spanish) sacrifices of coca leaves, alcohol, and tobacco during the work-week to ensure he doesn't "eat their souls" by collapsing their mine. Both Catholic and indigenous priests 'bless' the mines, the latter using the caught blood of a llama slaughtered for the occasion.

Trailer for the documentary "The Devil's Miner".

Another documentary, if you can stomach the leftist dribble of the narrator; watch for her comments at the end of the 5:30-5:55 minute stretch.

The other side of the story that you don't tell is that much of this was the Church's own fault. In the Yucatan, and certainly in the Maya highlands, the clergy were few and far between, and the Church refused to ordain or train any indigenous clergy. In other states in central Mexico, where clergy was more abundant, such syncretism was much more low key and within the bounds of Catholic tradition. Places like Bolivia and southern Mexico were too impoverished for the Church to really care about them, and the hierarchical Church's presence was sparse at best.

Besides, if the future of the Church lies in the First World, even amongst anti-immigrant right-wing Catholics, the future would be bleaker still. At least most people in Latin America know what being Catholic looks like, even if they take it to heart imperfectly.

Maybe this is not so bad.
Maybe it is good.