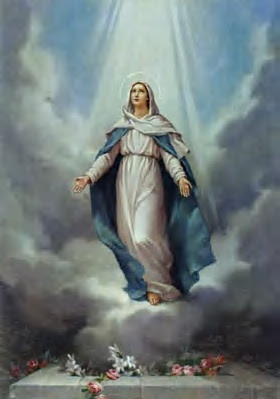 Since this Friday is the Assumption, I thought I'd deal with a Mariological question today while it is on my mind.
In my recent post on Medjugorje, I made a comment that a certain Medjugorje enthusiast by the name of Mr. Conte took the position that the Assumption of the Blessed Virgin Mary amounted to a Resurrection. I voiced the opinion that I found this bizarre, as I had never heard her Assumption spoken of in this way before. A blogger left me this comment in my box (he begins by quoting me):
Quote: "Mr. Conte also speculates that the Virgin Mary was not simply Assumed into heaven, but actually died and then was Resurrected and was then taken into heaven alive." That is more or less what I believe. Our lady being the first Christian was the first to share in the Resurection to which we are all called. Keep in mind that Pius XII was purposely short on details when he defined the assumption e.g. did Mary die or just go into a deep sleep? We are free to speculate but most theologians believe she likely died.
Now, I know that Pius XII left the details of the Assumptuon deliberately vague. She "finished the course of her earthly life." However, I always understood that there were only two really possibilities in this matter:
A) Mary died a real natural death, and then her body was assumed into heaven after death.
B) Mary did not die, but was assumed bodily into heaven while still alive.
To my knowledge, these were the only options ever discussed by the Fathers and Doctors. I may be wrong on this, but I think this is our only two options. Pius XII does not commit us to either, but Ott's Fundamentals says that position A (that Mary actually died) is more widely accepted.
However, we find Mr. Conte (and this blogger) expressing belief in the following type of scenario:
C) Mary dies, then is Resurrected back to earthly life, then is taken up bodily into heaven while alive in a Resurrected body.
Has anybody every heard any Father, Saint or theologian express this opinion? I have not. Just because the details are not specified doesn't mean we are free to come up with all sorts of outlandish scenarios that are not found in Tradition. I have two main problems with the idea of a Resurrection of Mary.
One, it makes the Assumption into two separate miracles: a Resurrection (in itself very miraculous), followed by a bodily Assumption. Catholics are of course committed to belief in a bodily Assumption, but I in no way see how this necessitates belief in a resurrection, any more than Elijah or Enoch needed a resurrection in order to be assumed.
You may say, "Yes, but they did not die. They were Assumed alive, and it is possible that Mary died prior to her Assumption. Wouldn't she then need to be Resurrected?"
No. A body is still a body, even if it is dead. Can't a dead body be Assumed? This seems to be the idea in the oldest Assumption story: the one about the twelve apostles wanting to gaze upon Mary's body one last time and opening the tomb to find her gone. Though it is not spelled out, the "assumption" in this story is that the dead body of Mary was taken into heaven straight from the tomb. She didn't rise from the tomb because in the story the Apostles have to open it up themselves (unlike the tomb of Christ, which was burst open).

Second point: yes, Mary was the first to participate in the Resurrection that we are all called to share. But that doesn't mean she therefore had a literal bodily Resurrection, anymore than anybody else who shares in the Resurrection of Christ has a bodily Resurrection prior to the Resurrection at the end of time. I mean, you could always make the case that Mary was a special circumstance, but even so, I don't see any logical or historical evidence that this was the case.
I don't think Mr. Conte or the blogger who left this comment are heretics for this belief. I just think it is a bit peculiar and not warranted by traditional Mariology. Any comments?
Posted by Boniface at 9:27 PM

Personally, I assume she was not resurrected.

Resurrection is the end of the bodily decay, and a new and perfect body is given to each of us.

Mary did not need a new and perfect body..... nor was she subject to the death/decay due to original sin.

Yes, we recognize the Resurrection of her Son, but even then it occured on the third day, and the Jews of the time would understand it was NOT the fourth day, like Lazurus, when decay was irreversible.

Additionally, no relics (1st Class) exist of Mary. As methodical as they were about those things, you wonder why the early Church would not keep, or attempt to keep her relics too as they did of the martyrs..... they knew where she went and how she got there.

The dogma does not say "life". it quite deliberately says "at the end of her earthly sojourn." Pope Pius XII did not wish to rule on whether Our Lady actually died.

to me, she fell in a deep sleep, the Apostles buried her thinking she was dead, and in the tomb was awoken by the angels, who opened the tomb and helped her up to be assumed into heaven.

then St. Thomas asks to open the tomb on the third day (again, implying bodily incorruption) on a faithful hunch, perhaps in a way a reversal from his earlier doubting of Our Lord; and they all see she is not there. yet, because the tomb was closed, it is clear the Virgin didn't do this herself, but rather the angels came to take her up to assume (heh) her Queenship.

thus she did not resurrect nor go up by herself, which would have been signs that were reserved for her Son, or otherwise shown to the faithful. if anything, that the Assumption was so low key, Mary falling asleep then assumed when no one saw, shows even more the character of Our Lady, submissive of the Lord to the end.

perhaps she did die, remaining incorrupted of course, but idk, do Enoch or Elijah have higher standing so as to be assumed alive? and while Mary was truly sinless, and the Assumption of her incorrupted body is proof of that, didn't that mean she could have defied bodily death due to original sin as well? then again, maybe the point the Lord was trying to make was that even Our Lady was still in a fallen human body, but precisely due to her sinless nature deserving first and foremost the real Resurrection. (the people He resurrected as miracles like St. Lazarus probably died again, yet also are part of the chorus of saints). but again, why not the Enoch and Elijah treatment if truly without even original sin?

perhaps "dormition" as mentioned in the beginning makes more sense, avoiding the "not decay but death?" question, and specially considering how some people of that age were accidentally buried alive, and in general Our Lady's humblest submissiveness to God's will, and Him using her as a way for Christians to gain in sanctity.