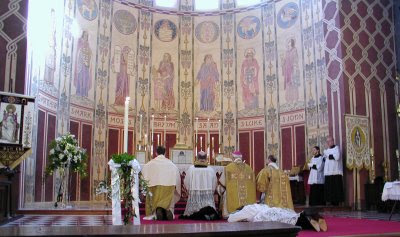 A (non) ordination being carried out in the Traditional Anglican Communion. At least they got the aesthetic elements correct!
This certainly has been a tremendous week for ecumenism, and no doubt connected with the Year of St. Paul and last weeks Week of Prayer for Christian Unity. The big news today is that the Pope may be set to offer the 400,000 member Traditional Anglican Communion the status of a personal prelature within the Catholic Church. A personal prelature, from my understanding of it, is kind of like a Diocese without boundaries.

Before I say anything else, I want to applaud Benedict XVI for this true gesture of ecumenism. This, together with last week's lifting of the SSPX excommunications and the promulgation of Summorum Pontificum have done more for ecumenism than anything John Paul II ever did. Benedict's ecumenism is rightly focused on what it should be: Christian unity. There is a much clearer point here than whatever garbled messages JP2 was sending with his ecumenical and interreligious actions (Assisi, Koran kissing, etc.), which tended to harm Christian unity rather than promote it because they rightly scandalized orthodox Catholics and Protestants alike.

Certain members of the Traditional Anglican Communion had hoped that the Pope would make the TAC a 28th rite within the Catholic Church, but left the matter entirely up to the Pope's discretion. They signed the Catechism of the Catholic Church, requested full union and left it up to the Pope to determine the terms. This humility, by the way, should be an example to the SSPX, who ought to remember Jesus' words to the Pharisees that "Tax collectors and prostitutes are entering the Kingdom of Heaven before you." I know it is rough speech, but it is pertinent: here we have Anglicans, Protestants whose schism with Rome goes back not 20 but 500 years and who are separated from the Pope by a history of violence and ill-will, coming humbly to the Holy See and offering to come back on whatever terms the Holy See sets. If somebody like the Anglican bishops can do this, there is no reason why the SSPX, whose differences with Rome are trivial compared to that of the Anglican Church, cannot follow suit here.

Damian Thompson has speculated rightly that a receiving of the TAC into full communion would cause a greater influx of other Anglicans into the fold as well, leaving only the most liberal and wacked out elements of the Anglican Communion on their own, where they will probably go off into New Age obscurity or vanish away like the Old Catholics. If the Pope and the TAC reach this agreement, we may see the beginning of the end of Anglicanism, at least in its historic form.

There are several difficulties which I and others have speculated on, however. The biggest ones being:
Married Bishops: While there is a precedent for accepting married priests in the Roman Catholic Church, what will be done with the TAC's married (non)bishops? Perhaps new priests will have to be elevated to that rank - but will the TAC bishops be willing to resign their office as the price of communion?

Holy Orders: More fundamental is the issue of Holy Orders: none of the TAC, priest or bishop, have valid Holy Orders (unless they are among the few who sought ordination by Eastern Orthodox bishops, which would have to be examined on a case by case basis). In April 2007 the TAC bishops signed the Catechism on the altar of Marian shrine of Our Lady of Walsingham, indicating that they agreed to everything the Church teaches. Will they also agree that their own ordinations are invalid? If they really are willing to come back on any terms the Holy See proposes, then ordinations of all its priests and bishops would be necessary-but even in my wildest dreams I can't imagine any Anglicans en masse admitting that their orders are invalid.

As a scholar of the Tudor era, a devotee of St. Thomas More and a lover of the beautiful English Catholic tradition, I think this is the most exciting news I have heard out of the Vatican since Summorum Pontificum. Let us pray, pray, pray for the full union of the TAC and Rome, and thank God for Pope Benedict XVI who, while he may not be as media savvy as JP2, certainly knows how to hunker down and get stuff done.
See Damian Thompson's article on the matter.
Posted by Boniface at 11:02 AM

I believe that there may be some possibility that the TAC possess Holy Orders. They are in the lineage of some Old Catholic bishops.

It must be true.
It's on the internet.
Pass it on.
http://www.liturgy.co.nz/blog/anglican-personal-prelature/467