Priests who don't know why they're priests 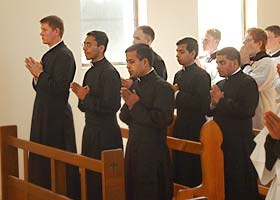 In the recent Vatican report on the state of United States seminaries, the Apostolic Visitation reported that though there were some areas that needed improvement (specifically knowledge of patristics and a better understanding of the place of the priest in the Church), the United States seminaries had shown a marked improvement since the previous two decades and that they were "overall" sound.

However, one area of concern cited by the report and that stuck out to me as well was the statement that a great many of today's seminariams say they come "from backgrounds with little faith experience or knowledge of Catholic doctrine" (source).
Now that is very interesting. Becoming a priest is a huge commitment, perhaps the greatest any man can make on this earth. It is a vocation that takes as many years of study as a medical doctorate, takes up one's entire life and goes on into eternity. It also means, eschatologically, that the priest will face a stricter judgment and be held to a more rigorous standard by God: "Let not many of you be teachers, my brothers, knowing that we will receive heavier judgment" (James 3:1). Becoming a priest is no light matter.

Therefore, why would so many seminarians come to the priesthood with "little faith experience or knowledge of Catholic doctrine"? What would possess them to say, "Wow, this is an almost superhuman commitment that is often full of perils and snares and gives little reward on this life. Well, I don't know anything about it, but it sounds good to me!" How is it that we get seminarians interested in making this commitment with little knowledge of Catholic dogma?

I think there are two answers for this. First has to do with the nature of modern ecclesiology. I think a great many of these men, though they may lack intellectual and dogmatic formation, feel an intense desire to serve. They may believe that the Catholic Church and the priesthood especially is entirely about service, and therefore desire the priesthood as a means of serving and helping their brother. In such a scenario, doctrinal elements would take a backseat, and indeed could even be perceived as a stumbling block to true service. I'd imagine this is how we get a lot of the social justice types in the priesthood. Their ecclesiological concept is more weighted horizontally than vertically, to use the common expressions.

The second element I think has to do with admission procedures within the seminary system. I know nothing about the internal functioning of a seminary, but I am going with a hunch here. It can't be the case that nobody but social justice horizontalists show up as candidates for the priesthood. In any Diocese I'm sure there are plenty who come with a real understanding of the Church's ecclesiology, wanting the priesthood not only as a means to serve (which it certainly is) but also as an answer to a call - a call to worship and adore God and sanctify souls by being dispensing the sacraments and offering the Sacrifice of the Mass. Now, I think that in many seminaries, these applicants are given a much shorter shrift than the horizontally focused social justice oriented ones. In short, I think many seminaries weed out doctrinally minded priests in favor of socially oriented ones.

I know a lot of work has been done in this area and I'm sure that this does in fact happen: the orthodox seminarian is rejected for rigid inflexibility while the doctrinally questionable but amiable social justice type is admitted, thus tilting the demographic of the seminarians. The thing I don't know about is how much is this a formal mandate from some seminaries that is carried out methodically as a matter of praxis and how much is it an unspoken, unwritten bias that works itself out in the personal likes and dislikes of the Director of Seminarians?

Well, praise God we have seminarians! But if you want to solve the vocations crisis, start promting an ecclesiology that is vertically oriented on the worship of God and less on social service and I guarantee the problem will be solved within a decade.
Posted by Boniface at 2:32 PM