I have been reflecting on what Athanasius said in his recent post about the Synod on the Word of God and the “Talking Church” and it brought to mind a very interesting paradox. How often is the accusation leveled against the pre-Vatican II Church that it was an impersonal bureaucracy out of touch with the common people? This assumption lies behind many of the shallow arguments in favor of things like Mass versus populum, multiple Eucharistic prayers, etc. “The old Church was so bureaucratic and impersonal! The new Church is so much more friendly, blah blah...”

So let's look at this faceless bureaucracy idea. What is the number one thing that ineffectual bureaucracies are known for? If nothing else, I'd say the perennial mark of the bureaucracy is endless mountains of documents and paperwork. Isn't this the case? There are many more marks of a bureaucracy of course, but let's just stick with the “document overkill” idea for a moment, as it relates to the topic at hand. Now, which era of the Church do we associate with mounds of useless documents, pre-Vatican II or post-Conciliar? Obviously the modern Church wins the award for the most copious amount of documents. Both the rate at which documents are churned out and the length of individual documents are greater in the post-Conciliar Church. Fides et Ratio and Familiaris Consortio are novellas. Even a relatively large pre-Vatican II encyclical (like Divini Redemptoris or Rerum Novarum) is thin in comparison. 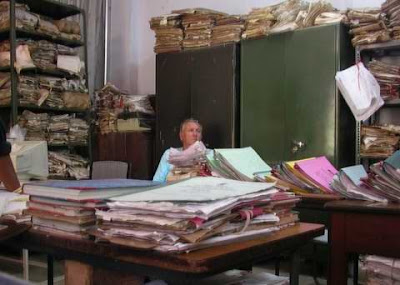 Catholic theologian attempting to keep abreast all of the Church's post-Conciliar statements
Now I do not care personally if a document is long or verbose. It's not that I can't or won't read them because I'm lazy or dumb (although, for a Church that insists so strongly on being pastoral, the post-Conciliar documents are very inaccessible to the average Joe because of their excessive verbosity and philosophical jargon – how is a layman to approach works with titles like “On the Unicity and Salvific Universality of Jesus Christ and the Church?” The faithful are too dumb to understand “ineffable” but are supposed to get interested in a document with a sub-title like that?). My irritation is that the current Magisterium feels like it always needs to be saying something. And saying is all, because as Athanasius pointed out, it really isn't doing a whole lot. Perhaps the idea is that by issuing so many statements and documents people will see how compassionate, relevant or in-touch the Church is. Isn't there a Proverb about not being too eager to speak? Ah, yes: “He who guards his mouth and his tongue keeps himself from trouble” and “He who guards his mouth protects his life; to open wide one's lips brings downfall” (Pro. 21:21, 13:3). It is a biblical principle that it is much better to act more and say less, and yet in the current Magisterium we see the opposite: a lot of talk and very little action.

In the 15th century, a radical movement within the Church that has come to be known as Conciliarism attempted to force an ecclesiology on the pope which demanded a submission of Pope to Council and the creation of a permanently sitting Council, a kind of ecclesiastical parliament. The popes zealously denounced this as a heresy and had completely triumphed over it by the early 16th century. But like other heresies, this one has crept back into the Church through the back door, winning many adherents in the hierarchy. But it is not so much a formulated dogma as it is a praxis which is taken for granted; i.e., The pope should always be saying something about something, making statements, going over talking points, etc. Perhaps this is supposed to create the illusion of action – perhaps the Magisterium thinks this sort of endless talk really is action. Whatever you attribute it to, what we are left with is a de facto permanent Council churning out documents year after year that are hastily put together (the working document for the Synod on the Word of God is a disaster), overly wordy, of an ambiguous nature, questionable in their authority and their veracity and seldom implemented or followed up on. If anything, this sort of routine does nothing but conditions the faithful to ignore Rome. Isn't that how we treat a person who talks too much – we shut them out?

Contrast this with the impact that short yet succinct documents are able to have – consider the firestorm that was set off by the Syllabus or Errors, a document that can be printed in three pages. Or, to take even a post-Conciliar example, look at Humanae Vitae. Compared to the tomes of JP2 it is quite short, and yet we'd have to agree that this encyclical has been the most consequential of modern times. A brief statement can be full of power and clarity.

Well, I'm sure we'll revisit this in the future, but check out this post if you want to read some analysis of the working document itself. Long story short: the Magisterium needs to issue documents that are brief, concise and theologically accurate, not rambling booklets that are dense, theologically sloppy and way too long.
Posted by Boniface at 11:14 PM