J.R.R. Tolkien on the Post-Conciliar Church 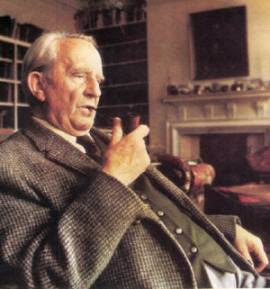 As I was plowing through the massive Letters of JRR Tolkien this week I came across a little gem that I'm sure many people have read but I have never heard any commentary on. This gem is a lengthy letter from Tolkien to his grandson Michael in which he expresses his views on the chnages to the Catholic Church within his lifetime. The letter was written in 1967, before the Novus Ordo had come in but while a lot of the crazy post-Conciliar implementation was going on. In the letter, Tolkien appears to be answering an inquiry from his grandson about the nature of the "trends" in the 1960's Church. It would definitely be something worth forwarding to Traditionalist Tolkien fans. I'm not going to offer any commentary on his thoughts, but I will put certain phrases in bold which I find particularly interesting.
The letter in number 306 in the Tolkien collection:
"'Trends' in the Church are...serious, especially to those accustomed to find in it a solace and a 'pax' in times of temporal trouble, and not just another arena of strife and change. But imagine the experience of those born (as I) between the Golden and Diamond Jubilee of Victoria. Both senses of imaginations of security have been stripped away from us. Now we find ourselves nakedly confronting the will of God, as concerns ourselves and our position in Time. 'Back to normal' - political and Christian predicaments - as a Catholic professor once said to me when I bemoaned the collapse of all my world that began just after I achieved 21. I know quite well that, to you as to me, the Church which once felt like a refuge, now often feels like a trap. There is nowhere else to go! (I wonder if this desperate feeling, the last state of loyalty hanging on, was not, even more often than is actually recorded in the Gospels, felt by Our Lord's followers in His earthly life-time?) I think there is nothing to do but pray, for the Church, the Vicar of Christ, and for ourselves; and meanwhile to exercise the virtue of loyalty, which indeed only becomes a virtue when one is under pressure to desert it.
There are, of course, various elements in the present situation, which are confused, though in fact distinct...The 'protestant' search backwards for 'simplicity' and directedness-which, of course, though it contains some good or at least intelligible motives, is mistaken and indeed vain. Because 'primitive Christianity' is now and in spite of all 'research' will ever remain largely unknown; because 'primitiveness' is no guarantee of value, and is and was in great part a reflection of ignorance. Grave abuses were as much an element in Christian 'liturgical' behavior from the beginning as now. (St. Paul's strictures on eucharistic behavior are sufficient to show this!) Still more because 'my church' was not intended by Our Lord to be static or remain in perpetual childhood; but to be a living organism (likened to a plant), which develops and changes in externals by the interaction of its bequeathed divine life and history - the particular circumstances of the world into which it is set. There is no resemblance between the 'mustard seed' and the full-grown tree. For those living in the days of its branching growth the Tree is the thing, for the history of a living thing is part of its life, and the history of a divine thing is sacred. The wise may know that it began with a seed, but it is vain to try and dig it up., for it no longer exists, and the virtue and powers that it had now reside in the Tree. Very good: but in husbandry the authorities, the keepers of the Tree, must look after it, according to such wisdom as they possess, prune it, remove cankers, get rid of parasites, and so forth (with trepidation, knowing how little their knowledge of growth is!). But they will certainly do harm, if they are obsessed with the desire of going back to the seed or even to the first youth of the plant when it was (as they imagine) pretty and unaffected by evils.
The other motive (now so confused with the primitivist one, even in the mind of any one of the reformers)" aggiornamento: bringing up to date: that has its own grave dangers, as has been apparent throughout history. With this 'ecumenicalness' has also become confused. I find myself in sympathy with those elements that are strictly 'ecumenical,' that is concerned with other groups or churches that call themselves (and often truly are) 'Christian.' We have prayed endlessly for Christian reunion, but it is difficult to see, if one reflects, how that could possibly begin to come about except as it has, with all its inevitable minor absurdities. An increase in 'charity' is an enormous gain."
After this Tolkien goes off into a reminiscence about his own Catholic upbringing and offers a brief reflection on the legal changes to the status of Catholics in England from the time of his birth (1892) up until then. What a great statement from one of my favorite authors on some of the pitfalls of the post-Conciliar reform!
Posted by Boniface at 8:51 AM

The definitive book on this subject is the "The Devastated Vineyard" by Dietrich Von Hildebrand. 1973.