"And His kingdom shall have no end." 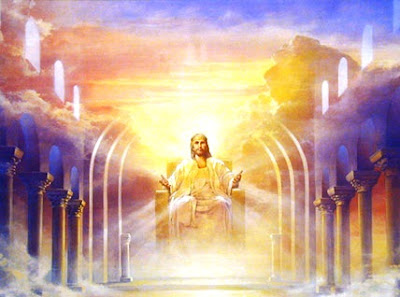 I have recently been reading a very wonderful book by an orthodox theologian, T.L. Frazier, entitled "A Second Look at the Second Coming" (Conciliar Press, 1999). This book takes a look at the End Times beliefs of Evangelical Protestantism and compares them with the eschatology of the patristic age, with an emphasis on Greek Fathers such as Chrysostom and Cyril of Jerusalem. It has much about the history of certain peculiar Evangelical beliefs on the End Times, especially regarding the secular State of Israel, the "Millenium," and of course, the Rapture.

I learned quite a bit from this book and hope to post on more of these topics in the near future. One interesting fact I gleaned (that perhaps some of you may have already known, but it was news to me), was that the phrase "And His kingdom shall have no end" from the Nicene Creed was added specifically to condemn the heresy of millenarianism (Latin), also known as chiliasm (Greek).

The millenarians were not a separate heretical group as were the Donatists or Manicheans, but were a group of Christians found in the Latin West and the Greek East who tended to interpret Christ's Second Coming in such a way as to assert that He would come and set up a temporal, political kingdom based in Jerusalem. From there, He would rule the earth as king of a physical realm and the world would enjoy unprecedented peace and prosperity for one-thousand years. Then, after a millenium was complete, Satan would be loosed for a time and would make war upon Christ and His Kingdom. After much destruction, this period would come to an end with the final defeat of Satan and the inauguration of the eternal reign of Christ which would never end. This reign after the defeat of Satan is differentiated from the earlier reign from Jerusalem in that it is no longer a temporal kingdom but a heavenly one. The millenarians, therefore, saw the reign of Christ as being composed of two kingdoms: one temporal that would last for a thousand years, the second and eternal one to follow the final defeat of Satan. The two most famous millenarians among the Fathers were St. Irenaeus and St. Justin Martyr.

It ought to be said that millenarianism was not condemned as a heresy until the 4th century, and one finds a small but numerable group of Fathers from the 2nd and 3rd centuries who seem to hold to the doctrine. The majority of the Fathers, however, interpreted the 1,000 year reign mentioned in Revelation as the age of the Church when Christ reigns on earth through His Body (i.e., the present age). The close of the thousand years is the Second Coming. For orthodox Catholics, the Second Coming arrives at the close of the thousand years: for millenarians, the Second Coming kicks off the thousand years. It was specifically to counter the millenarians that the Fathers of the Council of Nicea added the clause "And His Kingdom will have no end" to the Creed. If the kingdom has no end, then this precludes any notion of Satan interrupting Christ's kingdom after a thousand years and forcing Christ to inaugurate a new one after his final defeat. Once Christ comes to set up His kingdom, it is set up permanently, and not in an earthly sense from the city of Jerusalem, either.

Millenarianism is alive and well among Evangelical Protestants. In fact, it is probably the one heresy (other than Sola Fide and Sola Scriptura) that is most common among the denominations of Protestantism.