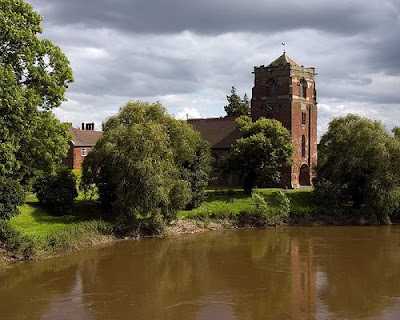 The 11th century Church of St. Eata at Atcham

From the Catholic Encylcopedia: St. Eata was the second Bishop of Hexham. It is uncertain when he was born, but his death is recorded as being on 26 October, 686. Whether this disciple of St. Aidan was of the English, or of the aboriginal Pictish, race, there is no means of judging. As early as 651 he was elected Abbot of Melrose, which was then within the jurisdiction ofYork. With the increase of the Christian population in northeastern Britain, the spiritual government of a territory was so wide as that which was then called Northumbria became too heavy a charge for one see; accordingly, in 678 Archbishop Theodore constituted Bernicia (that part of the Northumbrian realm which lay to the north of the River Tees) a suffragan diocese and consecrated Eata its bishop. The new diocese was to have two episcopal sees, one at Hexham and the other at Lindisfarne, at the two extremities of what is now the County of Northumberland. Eata was to be styled "Bishop of the Bernicians". This arrangement lasted only three years, and the See of Hexham was then assigned to Trumbert, while Eata kept Lindisfarne. In 684, after the death of Trumbert, St. Cuthbert was elected Bishop of Hexham, but when the latter expressed a desire to remain in his old home rather than remove to a more southern see, Eata readily consented to exchange with him, and for the last two years of his life occupied the See of Hexham, while Cuthbert ruled as bishop at Lindisfarne. Like most of the early saints of the English Church, St. Eata was canonized by general repute of sanctity among the faithful in the regions which he helped to Christianize. His feast is kept on 26 October, the day of his death.
Posted by Boniface at 3:17 PM