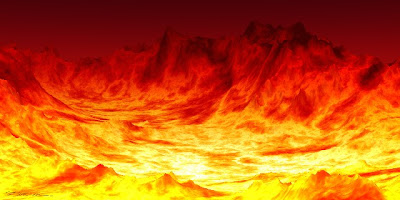 Most Catholics are not spiritually mature enough to see themselves, someone sitting in a pew on Sunday morning Mass, as actually being in danger of Hell. We're not universalists yet - but I envision our concept of Hell as this: a series of concentric circles, the outer circles being a high probability of Hell (pagans, not the noble kind), some other circles, etc.. and the 3rd inmost circle being Christians, the 2nd inmost circle being Catholics and the smallest circle with the lowest probability of going to Hell, practicing Catholics.

I think that such a sermon, on the pains of Hell, would be perceived as mean-spirited (as in "Oh, how our enemies will suffer!") because of this spiritual immaturity.

A better way to approach this topic would be to start with the sin of presumption (the sin of assuming one is "saved"); then moving to the necessity of believing in Hell based on the Scriptures, the Fathers, the Catechism and the existence of evil and justice; then answering common objections to the doctrine, of which our modern age is rife.

Something I ran across tonight...
"The priest reads the prayer offering the unconsecrated bread and wine (offertory) to God for the Mass. He then asks to Lord to please accept (suscipe) our offering despite our unworthiness, for all Christians - living or dead.

Long ago, worshipers would proceed to the altar bringing gifts of food, gold and other property."