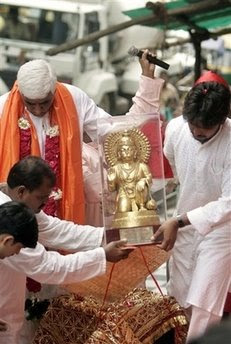 In another month we will see exactly what type of "Christian" Barack Obama is, and I predict it won't be pretty. Check out this article from The Hindu:

The idea of sending an idol of Hanuman dawned on him after friends in the United States mentioned a “prominent American politician who carried a miniature Hanuman idol in his pocket for luck,” Mr. Bhama said speaking on the first day of the ceremony on Tuesday.

“After hearing that, I decided to gift Mr. Obama a larger, gold-plated version along with the wishes of thousands of his supporters in this country,” said the leader struggling to lift the 15 kg, 21-inch brass idol.

The first-day ceremony, pranapratishta, or infusion of divine life into an idol, was performed by a dozen priests reciting mantras in tandem. It was attended by Democrats Abroad India chairperson Carolyn Sauvage, who spent over an hour at the venue.

The idol was later kept in the sanctum sanctorum of the Sankat Mochan Dham, where it will be kept for 10 more days. Mr. Bhama said several temples in New Delhi had already expressed an interest in keeping the idol for worship on their premises before it begins its journey across the Atlantic.

Along with the idol, a copy of Hanuman Chalisa, a compilation of hymns in praise of the Lord, would be sent.

“We will ensure that Mr. Obama receives the idol by August 24, a day before the Democratic National Convention in Denver, Colorado,” said Mr. Bhama.

Who exactly is Hanuman, you may ask? Well, in case you didn't know, Lord Hanuman is but one of Hinduism's 300 million gods. According to their sagas, he once impregnanted a fish by sweating in its mouth. It is this idol whom the Indians hope will grant Obama victory.

How will Mr. Obama respond to this "gift?" Perhaps some will take issue with me, but I do not see how any Christian can receive an idol of a false god with thanksgiving and gratitude. "But Boniface," some of you will object, "the Pope once received a gift of the Koran with gratitude, even though he didn't believe it was true." Well, that of course assumes that the Pope was justified in kissing the Koran, which I strenuously object to. I think it is somewhat circular reasoning anyway ("It's okay to do it because the Pope did it." Why was it okay for the Pope to do it? "Because there's nothing wrong with it!")

Have we forgotten the destruction of the prophets of Baal by Elijah, the demolition of Baal's temple by Gideon, the way God Himself threw down the idol of Dagon in his own temple! If God Himself broke the idol of Dagon, what ought Obama to do with the idol of Hanuman? I suggest to you that unless Obama sends this idol back, destroys it, or otherwise makes some comment about being unable to accept it because he is a Christian, then this is tantamount to publicly denying Christ (he ought to smash the thing and defile it with cow's blood: remember, in the Bible the Israelites not only destroyed pagan shrines, but defiled them after their destruction.).
This is not the same as the Pope receiving a book. Obama will be receiving an idol of a false god that is "worshipped" (the word the article uses), and who's believers assert has been infused with divine life and that Obama should receive it because it will bring him luck and victory in the campaign.

What do you think? Would St. Paul gratefully receive an idol of Diana as a gift? Though Obama certainly may not be the Antichrist to come, if he receives this gift I will not hesitate to call him antichrist with a small "a," as he will have publicly denied Jesus in my opinion.
Posted by Boniface at 5:09 PM

anyone else want to go and buy hindu statues so we can smash them and pour cows blood on them?

Jews need to read the New Testament and the Old Testament over.