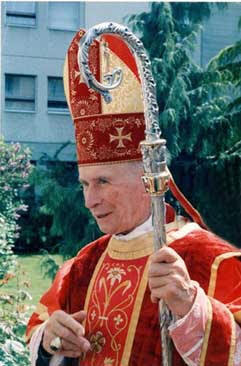 The net has been buzzing with news about the possible reconciliation between the SSPX and the Holy See that is being contemplated this week. Bishop Fellay and the SSPX, who have asked for the excommunication to be lifted, have until June 28th to consider several proposals presented on behalf of Benedict XVI by Dario Card. Castrillon Hoyos. For full union, the SSPX will have to agree to five points, one of which is known to be acceptance of Vatican II as a legitimate Ecumenical Council and the Novus Ordo as a valid Mass [UPDATE: In fact, the five points say nothing about this, but these are understood to be preconditions. See here for the real five points]. Rumor has it that if the proposal is accepted, the SSPX will be organized as a personal prelature, akin to Opus Dei. The original story came through the Italian jounral Il Giornale and can be found here and here.

I am truly uncertain as to how this could play out. On the one hand, more has happened in the past year than I ever could have imagined, and there are rumors of much more to come. Think about it! The liberalization of the old Mass, the statements of Ranjith and Hoyos on the satanic disobedience of recalictrant bishops who resist the MP, the rumors that the Vatican is about to condemn Medjugorje, the appointment of the Good Marini, the recption of 3,000 Assyrian Catholics back into the Church at Pentecost, the papal Masses at which Benedict has used ad orientam posture and distributed Communion to persons kneeling, the explosion of interest in the Traditional Latin Mass all over the world, and the strong statements of Hoyos in Britain last week concerning the Pope's wish that the TLM be offered in all parishes. This is truly a remarkable time in Church history and I would not doubt it if another remarkable thing like the reunion of the SSPX came about under this Pontificate, and sooner rather than later.
On the other hand, after reading recent remarks of Bishop Fellay on the papacy, it seems to me that the SSPX have developed a mentality of schism over the past twenty years that has come to regard their irregular state as permanent and has ceased to hope for any reunion, all the while heaping up more and more unrealistic conditions for union upon the Pope (like a renunciation of the Vatican II documents on religious liberty, which will never happen).
Please pray for the reunion of the SSPX and the Holy See. Let's see what June 28th brings us.
Posted by Boniface at 2:28 PM