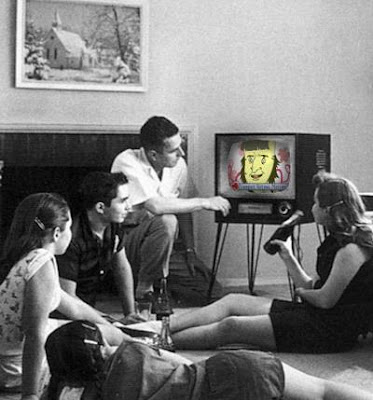 I was just listening to a very engaging CD series by Dr. Lawrence Feingold called "The De-Christianization of Western Civilization" in which he mentions the work of a certain Italian sociologist named Dr. Giovanni Sartori. This Italian wrote a fascinating and much controversial work entitled Homo Videns: Teledirected Society, in which Sartori makes some very pertinent warnings about the effects of too much exposure to television and the Internet on the human mind.

Before I go into Sartori'a argument, let me say that many have always spoke out against too much television. That is nothing new. There are two main arguments traditionally put forth against an excess of television:

The "It's a Beautiful Day" argument: "Why do you spend so much time in front of the TV? It's a beautiful day outside! Go ride your bike, play with your friends, get out and do something active for a change!"

The "Tool of Satan" argument: "My kids don't watch TV because the programming is so immoral these days that I can't in good conscience let them watch it."

Both of these arguments are valid, but weak, because they refer to things extrinsic to the television itself. In argument 1, one is encouraged to go outside and do something active. But suppose one has already done something active that day? Or suppose it's not a beautiful day, but rather it is a dreary, miserable Michigan January? In those cases, the argument seems to fall apart because it is based not on the disvalue of the television but on the existence of a better good outside of it. But if there is no better good outside at that time, it would seem that vegging out in front of the tube would be acceptable.

In argument 2, a similar mode of reasoning is taken up. TV is bad because too much immoral things come through it. But suppose that there exists a lot of programming that was good and moral, then would you not object to kids watching it four hours a day? Again, the argument against television in this case refers to something besides the act of TV watching itself (i.e., the shows that happen to be coming through the TV).

Now, there has been a third, vague and undefined argument against too much TV, and it is precisely this argument that Sartori takes up: the old "TV rots your brain" argument. I don't think most of us have given any thought to what this means, but we may have repeated it to our kids and had it repeated to us. Does TV "rot your brain?" If so, this would pertain to the act of TV watching itself, regardless of what was on or how the weather was outside.

Sartori points out that man has always been characterized as a rational animal, a homo sapien ("thinking man"). This means that his mental life is characterized by symbolization, the uttering of meaningful sounds and words that stand for abstract ideas. Sensory input gives information to the brain which then interprets the input in the form of ideas, and thus we come to grasp reality primarily through the intellect.

Now, since the advent of the television and the Internet, Sartori warns that most of our experience of the world and of abstract ideas (things like justice, love, etc.) are coming to us primarily through visual input alone. An excess of TV watching has turned men from beings who think about the world to beings who simply see it. This is what he calls the "involution" of man from homo sapiens ("thinking man") into homo videns ("seeing man"). This is even worse with the advent of the Internet: in television, man sees real images, but online he sees a lot more synthetic images that do not even reflect reality at all.

When man apprehended the world through reading, discussion, contemplation, etc., the reasoning faculty of man was fully engaged and he was more easily able to make logical connections and grasp meanings beyond the bare external. But what characterizes homo videns? Here is Sartori's definition: "tires of reading, prefers the abbreviated flash of a synthetic image. It fascinates and seduces him. He renounces logical links, reasoned sequences and reflection. By contrast, he yields to the immediate, heated, emotionally involving impulse." Reading, on the other hand, requires solitude, concentration, discriminating ability, appreciation for conceptualization and reasoning.

Essentially, Sartori says that TV has made the brain "softer" with the consequence of turning mankind into a being that primarily relates to the world through the visual medium only. For Sartori (an evolutionist), he puts this phenomenon in terms of actually reversing human evolution; hence the phrase "involution." We have become an age that values seeing over being. This criticism of television is more fundamental and important than the other two mentioned above, because this criticism actually concerns itself with the act of watching TV itself. I think Sartori puts into words what a lot of us suspected about TV for a long time but were unable to put into words: that it does indeed "rot your brain."

I tried to find this book, but it is currently only available in Spanish and Italian.
Posted by Boniface at 12:32 PM

I have just ordered the book (in Portuguese).

The best explanation I have ever read of "why is TV evil?" is to be found in the book "TELEVISION: Prelude to Chaos", by Fr. Frank Poncelet. Read especially Chapter 7, titled "Intrinsic evil".