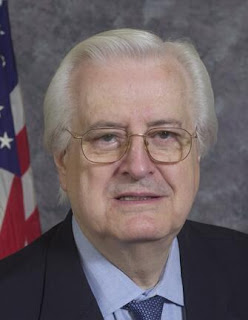 Last week former Illinois Representative Henry Hyde passed away at age 83. Are you saying to yourself, "So what? Who the heck was Henry Hyde?" Let me elaborate.
To those familiar with pro-Life history, Hyde's legacy is monumental. He was first elected to the House in 1974, only one year after the Roe vs. Wade decision. In 1976 he made a name for himself by attaching an amendment to a spending bill banning the use of federal funds to carry out abortions.What came to be known as the "Hyde Amendment" has since become a fixture in the annual debate over federal spending, and has served as an important marker for abortion foes seeking to discourage women from terminating pregnancies.
He was also a leader in passing the ban on partial-birth abortions, which he saw as an extension of society's duty to defend the weak. "The people we pretend to defend, the powerless, those who cannot escape, who cannot rise up in the streets, these are the ones that ought to be protected by the law. The law exists to protect the weak from the strong" (from a 2003 debate). As a devout Irish-Catholic, fighting abortion was simply a matter of conscience for Hyde, who never deviated from his pro-Life roots.
Perhaps more famous is his tenure as chairman of the House Judiciary Committee in 1998 that oversaw the impeachment case against Bill Clinton.
Hyde was well respected by legislators on both sides of the aisle, and seemed to many to be a throwback to an earlier time, a time when wit and civility counter for something in the legislative process and helped make things run more smoothly.
Hyde was born in Chicago on April 18, 1924. After serving in the Navy from 1944 to 1946, seeing combat in the Philippines, he graduated from Georgetown University in 1947 and returned to Chicago to earn a law degree from Loyola in 1949.
Posted by Boniface at 9:28 PM