Rome was no accident (part 1) 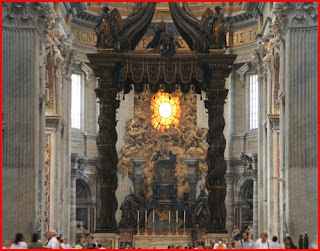 In the encyclical Lamentabile Sane of Pope St. Pius X of 1907, we see the following proposition condemned as heretical:

56. The Roman Church became the head of all the churches, not through the ordinance of Divine Providence, but merely through political conditions.

What does this mean, that the Roman Church became the head of all churches from "ordinance of Divine Providence" and not through political conditions? Well, I think it is sufficiently obvious that to be founded through the ordinance of Divine Providence means that the headship of the Roman Church was directly and positively willed by God; i.e., that it was His perfect will, not simply His permissive will. Rome's headship over the churches was part of God's eternal plan, just as much as Jesus' Incarnation or the coming of the Spirit at Pentecost.

Yet, how often when we read historical accounts of the ascendancy of the Roman Church do we hear only arguments from political developments that lack any reference to its divine founding? For example, how many times have you heard some kind of explanation that says that as the civil power failed in the Western Roman Empire due to the barbarian invasions (and as the imperial court moved east), more and more civil responsibilities fell to the Papacy, thus making the institution far more important and powerful than it had been in the earlier centuries. Or maybe something about Rome being the "natural" place for the Church to be centered since it was the political capital of the Empire?

Now, these arguments may be true in explaining the secondary causes for why Rome happened to become the head of the churches, but they are deficient because they fail to mention the primary cause: because God willed it to be so. Without reference to God as the primary agent in the establishment of the Popes at Rome, we are left with only historical/political arguments, arguments which Pius X says are defective.

The Fathers of the Church, in so far as they mention the founding of the Church at Rome, usually make recourse to its double-apostolic origin, the fact that it had both Sts Peter and Paul as its founders. For example, Tertullian makes this statement around the year 200: "But if you are near Italy, you have Rome, where authority is at hand for us too. What a happy church that is, on which the apostles poured out their whole doctrine with their blood; where Peter had a passion like that of the Lord, where Paul was crowned with the death of John [the Baptist, by being beheaded]" (Demurrer Against the Heretics 36 [A.D. 200]). This statement is standard among the Fathers: Rome's authority is guaranteed by her double-apostolic origin of the two most illustrious apostles.

This is a notably better argument than the historical ones cited above, and the Fathers usually use it with reference to this establishment being of God's will. But again, if we rely solely on this one and cut out any reference to the Divine mandate of the Father (as often happens), then this too falls short. Why? Because this argument is very closely linked with the fact of Peter's residency in Rome, and there is no necessary theological reason why Peter should have wound up in Rome. A man I know once met the Patriarch of Antioch. The Patriarch told him that he would be pope right now if Peter had stayed in Antioch instead of going to Rome. So in a sense, he viewed Peter's settlement in Rome as a kind of accident of history, in that if Peter had decided to stay in Antioch, the bishops of Antioch would be popes; or if Peter went to England, then the Archbishops of Canterbury would wield Petrine authority. But the residency of the popes at Rome is no such historical accident, neither of political conditions in the late Roman Empire nor of the of the individual missionary journeys of the Apostles.

We know for a fact that the primacy was attached to Peter as a person and passed on to those who inherited his office. The office remained at Rome, but was there any theological reason why Rome should have been the seat of the Church, or can we only come up with accidental, historical reasons to account for it? Pope St. Pius X says we must believe that it was of Divine Providence, and not due to an accident of history. Therefore, there must be a theological reason. Can we know what this reason is?

There are good theological and scriptural reasons for the physical locating of the Church in Rome, which I will go into next time.
Posted by Boniface at 10:07 AM