"I always wanted to be a June bride." 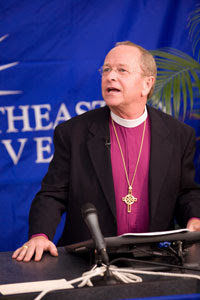 Remember Gene Robinson? He was the first openly-gay (non) bishop to be consecrated in the Episcopal Church back in 2004. On November of this year he made an announcement during a speech at Nova Southeastern University that he intends to enter into civil marriage in June of 2008 with his longtime partner Mark Andrews. The union will take place in New Hampshire, which will recognize such unions come January, 2008. "I've always wanted to be a June bride," Robinson told the group of 200 who had come to hear him. His statement was greeted with laughs and warm applause. Robinson’s address concluded the 2007 Goodwin Symposium on Sex, Morality and the Law sponsored by Nova Southeastern University’s Shepard Broad Law Center. The four-part lecture series began Oct. 11 with Suzanne Goldberg, a leading attorney on lesbian and gay rights issues, who discussed how the U.S. Supreme Court addresses sexual orientation issues.
During his talk, the Episcopalian (non) bishop made the following comments: "It may take many years for religious institutions to add their blessing for same-sex marriages and no church, mosque or synagogue should be forced to do so. But that should not slow down progress for the full civil right to marry... The greatest single hindrance to achievement of full rights for gays and lesbians can be laid at the doorstep of the three Abrahamic faiths-- Judaism, Christianity and Islam. It’s going to take people of faith to end discrimination."
His language reveals a glaring misunderstanding of the nature of marriage in a few different areas. First, no religious institution can give its "blessing" to same-sex marriages and this terminology ought never to be used. This implies that the homosexual couple is already married and simply seeks the legal (or what we would say, canonical) recognition of their churches. No religious body can "bless" a same-sex marriage because no such marriage can exist ever, no matter what civil government declares. Let us never use this language of "blessing" same-sex unions. Any attempt at a homosexual so-called marriage is invalid from the beginning (sacramentally, we could say due to "defect of matter"; ie, lack of one man and one woman).

Second, Robinson says that it will take a long time for religions to accept homosexuality, but that it should not impede the progress of gay rights in the civil arena. Essentially he believes that the religious aspect of matrimony is completely divorced from the civil aspect, the same way people assert that faith and morality are "private" issues and cannot be brought into the public. He fails to recognize that marriage is fudnamental to the existence of the state, both in the mathematical sense that the state is built of many smaller units called families, and in the sense that the good of the family is the good of the state and that broken or abnormal families are bad for the state. It is precisely because of this reality that states have historically taken it upon themselves to legislate regarding marriage. If homosexual so-called marriage is something we cannot sanction religiously, why on earth would we sanction it civily? Why would we approve something politically that we understand to be sinful morally? Can something be simultaneously bad for piety and good for the state? For the Catholic, the answer is a resounding "no." These two spheres are united and compenetrate each other, though of course the civil is subordinate to the spiritual. For Gene Robinson and his ilk, the civil is completely divorced from the spiritual and it is the spiritual that must take a backseat to the progress of the civil. And don't talk about "compenetrating" around Robinson; it might get him excited (okay, that was uncalled for).
By the way, what justification does Robinson, a professing Episcopalian, find for his position in Scripture? It so turns out that it is the same liberal-relativist Scripture scholarship that gave us the NAB that gives Robinson his biblical "foundation" for his position. He said that "scripture must viewed in its historical context" and compared the prohibitions on homosexuality with the prohibitions on pork eating; i.e., something binding at one time but that have since passed away as cultural traditions have changed.
First, this should demonstrate why modern biblical criticism is not the friend of the Catholic Church. Second, Robinson obviously fails to pick up on what I was taught in my first semester of my freshman year of theology at Ave Maria: that the ceremonial precepts of the Mosaic Law were binding only on the Jews of the Old Covenant while the moral precepts (like the prohibition of homosexuality) are binding for all men for all time. Third, even given the fact that we no longer follow the Jewish ceremonial code, it is not the case that we don't follow it simply because times have changed. We don't follow it because it was finally and definitively abrogated by Christ, not because times and cultural sensitivities have evolved.
"We changed our mind as a culture, as a nation, as a church about something we have been very sure about for a couple thousand years," Robinson said. Whatever culture and nation say, the Church, the true Church that is, can never "change our mind." But that is what happens when you belong to a ecclesial community that rejects Catholic Tradition in favor of modernist innovations and fads. The Episcopal-Anglican communion rejected Tradition in favor of a novel marital issue back in 1535, and again marital issues are dividing this community.
Of course, there were several asinine comments reported from people attending this conference. Nova law student Brian Kirlew, a professed Catholic, said he opposes discrimination against anyone, and thinks people often cloak it with religious justification. "The essence of Christianity is helping the less fortunate", he said. The debate over homosexuality is distracting. "Jesus’ predominant message is taking care of the poor," Kirlew said. Taking care of the poor is the "essence" of Jesus' teaching?
This is probably a result of the Catholic Church's excessive focus on "horizontalism" that this Catholic could make the comment that care of the poor is the "essence" of Jesus' mission. What about the redemption of humanity? What about the revelation of God as Trinity? What about the self-giving reality of God's divine love? What about the recognition of Christ as the Messiah? No, those are all too exclusivistic because they immediately create a divide between you and somebody who does not accept it, and because it is too "vertical." No, it is much easier to say that Jesus is all about compassion and love of the poor. Jesus certainly preaches these things, but to say that they are the center of His preaching is to radically miss the point.
This whole sorry affair is just another effect of modernism in contemporary religious life.
Posted by Boniface at 1:49 PM

Hey, at least this makes it easier for conservative Episcopalians (I'm assuming there are some) to get really angry and come running back to the TRUE Church, just like the Anglicans are...

Its funny that you attack Brian Kirlew. I am a Nova Law Student as well, and it seems that everytime he opens his mouth he says something stupid.