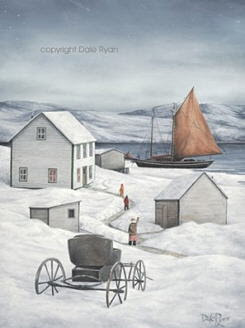 In a homily I recently heard, the priest made some very interesting remarks about the modern celebration of Christmas. First, as many others have noted in the Catholic world, he pointed out that the secular, consumerist drive to push Christmas sales as forced the Christmas season further and further back into the year until it has swallowed up the liturgical season of Advent. Christmas stuff all is brought out almost as soon as Thanksgiving dinner is off the table, oftentimes even sooner, like the day after Halloween. Many Catholics in the blogging world have noted this, and so I will not comment on it here, save to say that it is very sad because it robs us of our attention on the preperatory nature of Advent. If we prepare for the Second Coming the way we "prepare" for Christmas, then we are all lost.

Checkout this site that talks about "Have yourself a merry little Christmas". http://www.phillyburbs.com/christmascarols/merrylittle.shtml
The song was, apparently, even darker than we know it today.

That priest is a genius. What a wonderful sermon. I think the same can be true of "Christmas specials". Even as a kid, I never liked Frosty the Snowman. I mean, how in the world is it Christmas to have a snowman melt/die (ok, he "comes back to life, but still). It just didn't seem to be properly "Christmas". Now I know why.

Hello again. I realized, after writing my comment, that *you* were the one who came up with the theory about the secular Christmas=depression. I applaud you. Excellent post!!

(I didn't read the whole entry, but) I LOVED that homily that you're referring to! As a matter of fact, someone gave him (the priest) as a Christmas present a card that, when opened, it sings "White Christmas," referencing that homily! tee hee!

Chestnuts roasting on an open fire? In march, when it snowed. We love to roast chestuts in our fireplace.
Real Holy and Ivy? Last Christmas.
Kissed under mistletoe? Personally never but watched my parents do it again at Christmas.
Had a real Christmas tree? Last Christmas again, we've never had a fake tree, well I had a miniature fake tree in my room one Christmas alongside the main one because I wanted to decorate but my parents are control freaks.

And as for the place where my family first settled in this land, lost to antiquity I am afraid, because we have been here (well down my paternal line) since before the Normans came (my mothers side, her adoptive family is Norman but somehow I doubt the Earl of Shrewsbury is going to let us go back to his home, if he still owns it, although it would be rather nice, nor would are we likely to be going back to the Basque country). But we live in the country anyway, not in suburbia, although not on a farm.

But seriously a lot of those things are easy, how hard is it to get a tree? or a fire, do they not build fireplaces into houses in the USA? or silver bells? or mistletoe and holly and ivy? Even the horse drawn carriage could be arranged for less than the cost of car insurance. The problem is none of those things will actually fix the problem being eluded to by the songs (they ARE nice though and well worth having - especially roast chestnuts and a real tree).

But yeah apart from that little quibble I agree (and I know this was written ages ago but I wanted to say).

These things are not difficult to get in America, but people simply don't do them. Actually, come to think of it, I do not know where I would get real holly or ivy.

90% of American homes are not equipped with fireplaces, so one could not roast chestnuts over them.

They sell fake Mistletoe at Wal-Mart, but I don't know where you'd get it for real.

Horse drawn carriages are sometimes brought out in the towns for $5 a ride around the block, but it is not the same as taking one "over the river and through the woods" in an age long past when this was the primary mode of travel.

So, yes, things are a bit different here...
Real Christmas trees sell for about $45 dollars (about 30 pounds?) and are sold on the street corners, pre-cut, by Arabs and swarthy looking foreigners.

I do agree that secular society often misses out on the joy of the Season, but I wanted to throw out a thought I had about the two songs you referenced.

White Christmas was written during WWII and sang in a movie (by the same name) that was set in the War. The first time it is sung in the movie, it is by a soldier singing to other soldiers on the battlefield...perhaps "dreaming of a white Christmas" like the one he used to know was a legitimate expression of how many people were feeling at that time.

Have yourself a Merry Little Christmas was also from a movie (Meet Me in St. Louis). The context in which the song was sung was part of a sad part in the plot of the movie. Judy Garland's character's little sister was sad about having to move from their family's home and leaving all their friends behind. So, the lyrics fit the plot of the movie...

Both of these movies were made during WWII (although Meet Me in St. Louis was not set during that time) and the sense of nostalgia probably resonated with the people living through that time. I think that is a legitimate expression of what they were going through. Beyond that, I think that these songs just came to be a tradition in families.

Should we focus more on the joy of the birth of Christ than we do, of course! But, I just wanted to throw these ideas out there for consideration