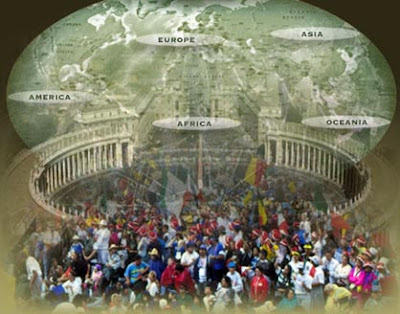 I want to offer a brief reflection on an aspect of the faith that I think gets overlooked in some traditionalist circles, and that I myself tend to forget sometimes. Too often I emphasize traditional Catholicism from a standpoint of, "This is the way we have always done it," or, "This is the way the rubrics say it ought to be done," or from any other varying viewpoints that all revolve around the obligation of Catholics to live the traditions of the faith. I guess you could call this the legal or canonical aspect of Traditionalism. It is a very valid point: doing something because its always been done is an extremely important reason for doing something in the Church; indeed, it is often the best reason. And it is no less important to stress conformity with known regulations and canonical measures over and against unrestrained creativity and liturgical dabbling.

But here I want to dwell for a moment not on the legal/canonical side that we are obliged to keep, but on the evangelical power of Catholic Tradition. The Catholic Faith, in all its fullness and splendor, is the most powerful tool of evangelization we have. It is a paradox: the Faith is what we want to bring people to (faith in the Person Who is Christ), but the Faith is the tool that we use to bring people to the Faith. The Faith is Truth, and when we fearlessly teach the truth, it has a power behind it—a power that Pope Benedict calls "performative"(Spe Salvi, 2) The Catholic Faith is like a lion: all we have to do is let it out of the cage and it will take care of the rest.

How beautiful the Faith is! How interesting and powerful, inbued with the grace and power to transform lives and purify souls! I recall my brother-in-law, who is coming into the Church, tell me that the Mass was the most beautiful thing he'd ever seen (and he said this about a tolerably well done NO!); if the Faith is ever presented in its fullness, it cannot help but win people to it. The Mass is our Faith acted out; by attending Mass (especially the TLM), one does not simply learn about the articles of the faith but one lives and experiences the Faith; it is inhaled and basked in, culminating in the great Mystery of the altar.
I was told today about a couple who went through RCIA in a very liberal parish. The DRE would not explicitly state that Jesus was the only way to God; he hemmed and hawed on the question of homosexuality, he tacitly accepted and even encouraged dabbling in other religious traditions. Needless to say, the liturgical life of the parish was a nightmare. RCIA sessions did not impart instruction but instead consisted of "group sessions" where people were encouraged to talk about their "feelings." Guess what? Within a year after Easter, that couple were no longer practicing Catholics. Maybe they just decided to stay home; maybe they are Protestants, maybe they are Hindus or athiests. I don't know, but it is certain that the soppy, weak, milky-cereal Catholicism they were given did not hold them. But the true Faith is so unlike that! The watered down faith makes only excuses and apologies; the true Faith makes martyrs and confessors.

Somebody asked me recently about the Church and Judaism. To make a long story short, I responded by pointing out that the rituals of the Jews were never salvific, even in Old Testament times, and that everybody, Jews not excepted, needed to come to God through Jesus. The person thanked me for my answer and went their way satisfied. It took five minutes to explain. Then I thought to myself, "There are people in the Church, even members of the hierarchy, who would never in a million years give that answer. They would set up committees, exchange letters, have dialogues, issue ambiguous and useless documents and beat around the bush for a hundred years before saying that Jews needed Jesus." Not to pride myself on my statement, but isn't it true! The lengths they go to in order to avoid saying the simple truth!

The Faith is so simple if we let it be itself, and so powerful to attract, transform and save if we simply trust it and trust Jesus to do what He promised. We were simply called to preach; He'll take care of the rest. If we take Him at His word, then away for ever with any Catholicism that denies the fundamental truths and traditions of the Faith, for not only is it disobedience, but it will not win any converts. It will actually drive them away. Why do you think so many people are leaving the Church while the traditional parishes are exploding in membership? We all know, for it is self-evident. It takes an intentional act of intellectual dishonesty to not see the connection. Bring back Catholic Tradition in all its fullness and watch the converts flock in.
Posted by Boniface at 3:53 PM