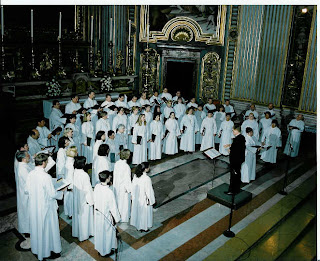 I recently had a chat with a parish priest regarding how to determine when a hymn is suitable to use in Mass (reference note: using "hymns" is somthing foreign to the Traditional Mass; the music of the Mass was simply the prayers of the Mass set to Gregorian Chant. Having "hymns" is a Protestant invention that was only introduced, illicitly, into the Mass of Paul VI after 1969). The hymn in question was the hymn "This Day God Gives Me", the text of which is based on the Breastplate of St. Patrick and the music organized by (ugh) Marty Haugen.

First of all, I, personally, reject out of hand anything by Marty Haugen. However, the priest in this discussion said that because the text was drawn right from the prayer of St. Patrick, there was nothing objectionable in it and could be safely used. I thought this argument fallacious for several reasons.

When we examine what music to use in the Divine Liturgy, we must look at three criteria: the text itself, the musical composition, and the intent of the author. Now, in this particular case, there is no problem with the text (the dignity of the English translation notwithstanding). It is lifted right from St. Patrick's Breastplate and, interpreted in light of Tradition, is doctrinally sound.

Next, musical composition: herein is where many people who are musically inclined (myself included) object to writers like Haugen, Haas and Michael Joncas. Musically, the pieces do not elevate the mind to contemplate heavenly realities but are modeled after secular music. Pope Pius X in his 1903 motu proprio Tra le Sollecitudini declared that "musical compositions of modern style which are admitted in the Church may contain nothing profane, [must] be free from reminiscences of motifs adopted in the theaters, and be not fashioned even in their external forms after the manner of profane pieces." So even in its external forms sacred music must not imitate profane music. This is what the sappy music of Haugen does regularly. Therefore, this piece should have been ruled out by this criteria alone.

But perhaps the third criteria is the most important and most neglected in evaluating hymns to use in the Mass: intent of the author. We know, from many statements and from lyrics of several of his songs, that Marty Haugen is a heretic who believes in women's ordination, denies the Real Presence and adheres to all of the other modernist errors. Therefore, even though Haugen can (and usually does) quote directly from Scripture or prayers of the Saints, we must look not just at the text but at what he means by the texts he quotes. For example, when he quotes the Gosepl of Luke in his communion song "Blest Are You", he says, "Come and know the one who brings you life / In the breaking of the bread, in the breaking of the bread." Now, this is lifted directly from the Scriptures (the disciples on the road to Emmaus meeting Christ and knowing Him in the breaking of the bread). However, we know what Haugen intends when he says "breaking of the bread." He does not mean the Real Presence of Christ as taught by the doctrine of Transubstantiation, but a spiritual presence of Christ that is found in the community breaking bread (just bread) together in memory (just memory) of Christ. Therefore, though the text is licit, the intent is laced with heresy. This is what the Church defines as ambigua or suspecta de haeresi, errorem.

This principle is the reason why it is not fitting to use Protestant hymns, no matter how noble, in the Mass. For example, in Amazing Grace by John Newton (which is unfortunately sung in Catholic parishes more than Panis Angelicus nowadays), Newton says, "Amazing grace! How sweet the sound that saved a wretch like me! I once was lost, but now am found; was blind, but now I see." There is nothing wrong with these words; they are actually a rather beautiful meditation on the goodness of God's grace. But, being a Protestant influenced by New England Calvinism, we know that Newton's idea of what grace is was profoundly different from that of Catholic orthodoxy. Grace, for him, implies predestination, irresistable grace, sola fide and all of the other Protestant errors. Therefore, this song should not be used in Mass because it fails our third criteria (and, our second as well, perhaps). It is not an allowable practice to take a song heretical in meaning and simply reinterpret it in a Catholic way.

Therefore, don't be fooled just because the texts of Haugen and Haas are lifted from Scripture. The text is not all that matters. But of course, this whole conversation should be moot because we should not even be singing these kind of hymns in Mass at all. As Sacrosanctum Concilium says in article 116, "The Church acknowledges Gregorian chant as specially suited to the Roman liturgy: therefore, other things being equal, it should be given pride of place in liturgical services."
Posted by Boniface at 10:40 AM

You're a ridiculous person, speaking from heresay, and saying nothing.