Is Liturgy Really That Big A Deal? 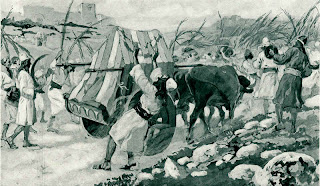 Uzzah is Struck Dead for Touching the Ark of the Covenant


Since the release of Summorum Pontificum, many have criticized Traditionalist Catholics for their perceived uptightness about liturgical matters. "Why be so finicky about the liturgy?" they say. "There are more important issues to get upset about! Issues like poverty, war, abortion and social justice! Why get all worked up about liturgical reform? It is just a matter of aesthetics anyhow!"


While the above topics certainly are worthy of attention, liturgy takes a special place because in the Divine Liturgy we worship God Himself. Remember when Judas was indignant with Mary of Bethany for anointing the feet of Jesus? "Why was this ointment not sold for three hundred denarii and given to the poor?" Jesus said, "Let her alone...the poor you have with you always, but you do not always have me" (John 12:5,7). When we adore and worship Jesus, we are performing a supremely important action; in fact, it is the action we were created to do.


One way of telling how important something is to God is seeing how many people He has struck dead over it. I'm serious about this! Consider the following facts: God did not strike Adam dead when he committed the first sin, nor did He smite Cain for murder. He did not smite Noah for drunkenness, nor did He kill Joseph's brothers for selling him into slavery. Aaron was not even smitten for making the golden calf and David was not struck down for his adulterous and murderous affair with Bathsheba. Even wicked Manasseh of Judah was not killed by God when he sacrificed babies to Moloch in the Valley of Hinnom. However, here are some people who were smitten by God in divine anger:

Nadab and Abihu, the sons of Aaron, are consumed by divine flame for offering unholy fire before the Lord, fire "such as the Lord had not commanded them" (Lev. 10:1-3).

A man is put to death under God's Law for not honoring the day of rest by picking up sticks (Num. 15:32-36). The day of rest was supposed to be the day on which God was worshipped.

Korah, Dathan Abiram and their party are consumed by fire and swallowed up into the earth because they sought to usurp the priestly role of Aaron. Their heresy was that they asserted that "all the congregation is holy, every one of them, and the Lord is among them" (Num. 16:1-40).

Hophni and Phineas, the two wicked sons of Eli the High Priest are marked out for death by God because they partook of consecrated meat from the offerings made to the Lord at the Tent of Meeting (1 Sam. 2:12-4:11).

King Saul offers a sacrifice because the priest Samuel is late in arriving for the ceremony. As a result, God rejects him from being King, he becomes tormented by evil spirits and is slain on Mount Gilboa (1 Sam. 13:8-14).

Uzzah is struck dead because he touched the Ark, the supreme object of Israelite liturgical worship (2 Sam. 6:7).

King Uzziah of Judah is smitten with leprosy "to the day of his death" for trying to offer incense in the Holy Temple in violation of the law permitting only priests and levites from doing so (2 Chr. 26:16-21).


St. Paul warns the Corinthians that improper reception of the Holy Eucharist can merit death by profaning Christ's Body (I Cor. 11:27-33).Judging by all of these examples, it would seem that God's wrath was more provoked by Korah and Dathan usurping the priestly role of Moses than by Manasseh slaughtering infants. We know from Scripture that Manasseh was taken into captivity, had time to repent, and indeed did repent of his wickedness. But we know that Uzzah, Dathan, Korah, Nadab and all the rest on this list were slain immediately without time for afterthought or repentance. All of the people on this list died because they violated Old Testament prescriptions regarding the proper worship of God in one way or another.
Therefore, let anybody who is tempted to think that the proper worship of God is not important (supremely important!), that it does not matter whether we use Gregorian Chant or guitars and bongos in Mass, that "slavishly accurate" liturgucal translations are not vital, that God is not outraged by Clown Masses, Guitar Masses and all the rest of the abominations we hear about, let them remember St. Paul's admonition in the epistle to the Hebrews: "A man who has violated the Law of Moses dies without mercy at the testimony of two or three witnesses. How much worse punishment do you think will be deserved by the man who has spurned the Son of God and profaned the blood of the covenant by which he was sanctified, and outraged the Spirit of Grace. For we know Him who said, "Vengeance is Mine, I will repay." And again, "The Lord will judge His people." It is a fearful thing to fall into the hands of the living God" (Heb. 10:28-31).
Posted by Boniface at 9:04 AM

It's now 2012 and five years after this was posted. This is wonderful information even for today's audience; if only the leadership of the Church believed and heeded these things. Perhaps the crisis of Faith that is so intertwined into the hot mess known as the Novus Ordo would have either been corrected, or better yet, done away with altogether.

Thank you for your gracious comment! The Lord bless you!

Can you help me understand something? I do not dispute the importance of worship or keeping the law. I personally agree with what you wrote. However, I sometimes see the argument that Christ Himself did not always keep the law, such as when allowing the disciples to pick grains on the Sabbath. It was the Pharisees who were constantly keeping the law, in a sense, but who provoked Christ's anger.

How do we distinguish our own care for the law and worship (even the 'small' things) from Phariseeism?

Hi! Can you give me till after Easter to answer this? I will post the link her next week.

In the meantime, have you seen these?

Of course, please take your time and thank you for your help.