Mary: Sure Defense Against Heresy

In the world of theology, there are so many subtelties, novelties and ambiguities that one who is not anchored steadfastly in the Faith of the Fathers can easily go astray. Jesus warned that the path to destruction is broad, and the road that leads to life is narrow, and there are "few who find it." When Christ came into the world at His Advent, it was through Mary. And Mary today continues to be a bulwark against heresy and a sure sign of the truth. The Little Office of the Blessed Virgin Mary, composed in the 9th or 10th century, says, "Rejoice, Virgin Mary, you alone have destroyed all heresies throughout the world." How does Mary destroy all heresies?

In several ways: by her conception of the One Who is Truth, she bears unique witness to the Truth and in her very person is a sign against those who would deny that the Second Person of the Trinity became flesh (the source of all heresy); furthermore, by her role as spouse of the Holy Spirit and mediatrix of grace she obtains for the Church the graces to bear witness to the Truth and to call out heresy when it is seen. 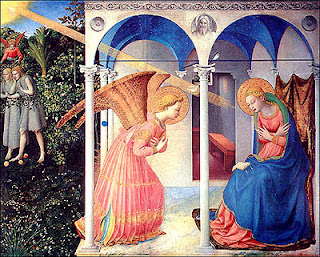 This is not obscure theology; it is very practical. Have you ever noticed how all modern heresies have one thing in common? They all leave out Mary. Let's look at a few. Protestant-influenced biblical criticism sees Marian devotion as a superstitious accretion from the Middle Ages; post-Vatican II modernist theology has downplayed Marian devotion to the point that (while the Rosary has not disappeared) Marian devotions like the Angelus, May Crownings, the Litany of Loreto and others are almost unknown. Feminist theology sees Mary as a sign of the submissive, male-dominated woman who must not be emulated but scorned. Protestantism has a long and well-known aversion to Mary because they fear that one commits idolatry in honoring her. Liberation theology has no place for Marian devotion because Marian devotion always encourages humility and submission, not revolution and envy. All of these heresies have one thing in common: they reject traditional Marian devotion.

As Fr. Chad Ripperger says, authentic spirituality is always Marian in character. As all graces come through Mary's hands, it seeks her intrecession; as she is the model of virtue, it seeks to emulate her; as she is the Mother of Christ, it always sees her as a unique and glorious pathway to the heart of her Son. Any heresy that rejects Christian morality, traditional Christological theology or historic Christianity must necessarily reject Mary as well, for outside of Traditional theology, morality and history, her role makes no sense to the dissenter and heretic. Therefore, we can acclaim with the Little Office that she is a destroyer of heresies and can look for her presence as a sure sign of orthodoxy.
Posted by Boniface at 1:53 PM