Orthodoxy Is Not Enough! 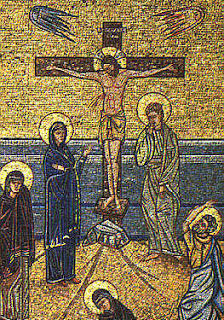 There is a fine but necessary distinction that has been made, mainly by traditionalists, on the difference between conservative Catholicism and traditionalism. Now, by definition, "conservative" means one who wants to conserve the status quo. In politics, conservative is opposed to "liberal", one who believes in progress and change. In Catholic circles, conservative tends to simply mean doctrinally orthodox and, following the political paradigm, is opposed to Catholic liberalism which wants to change the Church's teaching. It is my assertion, and the assertion of other traditionalists, that this equation of the conservative Catholics with orthodoxy is misleading, mainly for two reasons: 1) Political paradigms do not apply to the Church, and 2) To be a political conservative and an orthodox Catholic are not the same thing.

Orthodoxy means "right thinking" and applies to one who holds to the teachings of the Catholic Church (now, pay attention to this here!). Traditionally, Catholic doctrine was best explained by the most recent Church pronouncements. For example, Nicea made distinctions which prior to it were more unclear, Lateran IV cleared up problems of the early middle ages, Trent made dogmatic distinctions on debated issues regarding Protestantism, and Vatican I cleared up questions of papal infallability. Traditonally, if one wanted to know the teachings of the Church, they were best found in the decrees of the most recent ecumenical council. This is because 1) The councils always clarified disputed or ambiguous points, and 2) The decrees of the councils were always made in the context of the totality of Catholic Tradition. Therefore, a council was able at the same time to be a faithful safeguard of Catholic Tradition and render distinctions and clarifications that were necessary. There was never a dichotomy between adopting needed reforms and maintaining Catholic Tradition. Therefore, for most of Catholic history, the true test of orthodoxy was adhering to the most recent ecumenical council of the Church. There were times when being a Chalcedonian Catholic or a Tridentine Catholic simply meant that you were adhering to the decrees of the last ecumenical council (as opposed to dissident groups, like the Old Catholics, for example, who rejected the decrees of Vatican I).
Now, unfortunately, this state of affairs no longer exists. Orthodoxy can no longer be interpreted to mean simple adherence to the latest council (Vatican II) because, unlike every other council since the beginning of the Church, Vatican II did not clarify anything but made every disputed point more ambiguous, actually created more distinctions and arguable positions and furthermore failed to pass on Catholic Tradition in its fullness. Therefore, today in 2007, one who holds solidly to the teachings of Vatican II alone without reference to the prior 2,000 years of Tradition, may still be doctrinally orthodox, but they fail to grasp the majority of Catholic teaching and practice that existed prior to the great muddying of the waters that occured in the 1960's.
I would say that, in this sad time in the Church, it is no longer good enough to be simply orthodox (if we interpret orthodoxy in its popular meaning of adherence to the doctrines of the Church as promulgated by the latest ecumenical council). Perhaps we should bring into the picture Fr. Ripperger's distinction between intrinsic Tradition (things like the form of the sacraments) and extrinsic Tradition (things like traditional spiritualities, Catholic archtitecture and art, the Divine Office, Gregorian Chant). Extrinsic Tradition is exactly what was jettisoned after Vatican II; whether it was intentional or not is of no matter, for they were done away with just the same. If one adhere's only to Vatican II and does not take into account the previous 2,000 years of Magisterial teaching (many of the disciplines of which are still binding), one misses out on the bulk of what it means to be Catholic.
When we say "orthodox," we must render its definition more inclusive by containing within the term not only adherence to the most recent Magisterial definitions, but also the totality of Catholic Tradition as passed down from the founding of the Church, with all its multiform incarnations in the realms of art, music, theology and spirituality. Catholic means universal, in the sense that it encompasses all peoples but also that it preserves the Traditions of the Church for all time. To be a faithful Catholic in the fullest sense of the word is to embrace Tradition. I don't know of any other way to phrase it.
Posted by Boniface at 7:45 AM