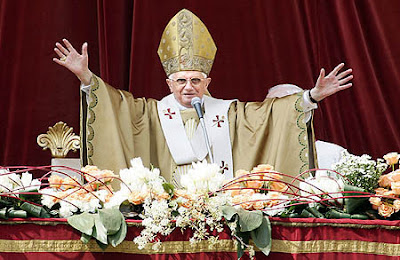 Praise and thanks be to God for the document Summorum Pontificum released this Saturday. I think I speak for many when I say that this document exceeded many of our expectations. The Mass of 1962 has been completely freed and any priest who wishes to may use it without the permission of his Ordinary. Furthermore, the old usages for all of the sacraments have been allowed as well. Perhaps the most rewarding thing about this document is the vindication it gives to those who claimed that the Mass of 1962 was never abrogated and that it has always been allowed (the actions of local bishops in surpressing it notwithstanding).

The Holy Father has explicitly declared that the Mass of Bl. John XXIII was in point of fact never abrogated. This is just another step towards what has been rightfully called "the reform of the reform." Perhaps now we can move away from the kind of horrendous liturgical abuses that we have all been subject to for so long. 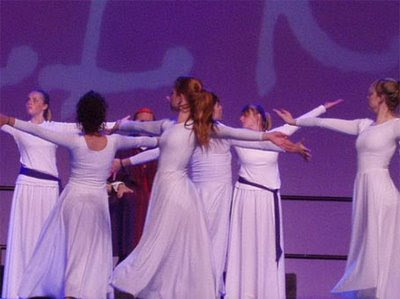 Liturgical Abuse: Just say No
While there is much to do from here on out, I cannot help but pondering the next step. This is a long and slow process, and one marked by many small steppingstones. The Indult of 1984 and its expansion in 1988 are two previous steps, and this is another one. What should come next? When will it be enough? I will tell you what I would like to see next:

(1) The old usage be declared the "normative" form of the Latin rite instead of the extraordinary form.

(2) The gradual phasing out of the Novus Ordo.

(3)
Some kind of official acknowledgement that the hoped for "riches" envisioned by Sacrosanctum Concilium have not materialized and that the implementation of the Novus Ordo has been an abject failure.

The end we ought to be aiming at should be, in the words of Msgr. Klaus Gamber: "In the final analysis, in the future the traditional rite of the Mass must be retained in the Roman Catholic Church...as the primary liturgical form for the celebration of Mass. It must become once more the norm of our faith and the symbol of Catholic unity throughout the world, a rock of stability in a period of upheaval and neverending change" (from : "Reform of the Roman Liturgy, pg. 114).
Is this too much? I don't think so. I do not want the Mass of 1962 just to satisfy my own private aesthetic or spiritual "taste"; I honestly think this usage is better for the Church Universal, and therefore I think we ought to, as a final goal, will that it be used by the Universal Church, as it had been for 1500 years. Well, the next several months should be exciting to say the least!
Posted by Boniface at 8:59 AM

Great post. I'm putting you on my blog role.