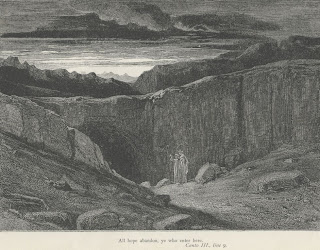 The Gates of Hell, from Dante's Inferno. In ages past, it was believed that theological and canonical censures could place one outside of God's grace. How many modern theologians are intimidated by such a proposition today?
Since the quiet dropping of the use of the condemnatory formula anathema sit by the post-Vatican II Magisterium, the Church has lost one of its most potent weapons against error. Many objected to the process of defining truth by condemning its contraries; they said this was dogmatic, narrow minded and arrogant. First of all, I would not say that "dogmatic" is a bad word; I wish pronouncements of the Church were more dogmatic and less pastoral in tone. But at any rate, the point is that truth, by its very nature as an existential affirmation, implies a negation of the opposite. For example, we can phrase the truth 2 + 2 = 4 in the affirmative, by saying, "It is true that 2 + 2 = 4." Now, we could also phrase this same truth in the negative, "If anyone says that 2 + 2 does not equal 4, anathema sit." If the positive is affirmed, then the negative is denied. It is not about intolerance, but simply about precise division of right from wrong.

When we talk about precise division of right from wrong, we are getting into the area of theological censures. A theological censure is a judgment by the Church on a particular teaching or proposition (not to be confused with a canonical censure, which applies to persons and not to statements). Nowadays, most Catholics are only familiar with one form of theologcal censure: heresy. However, the dividing line between heresy and orthodoxy is not a division between black and white. Before Vatican II, the Church has a whole slew of judgments it rendered against propositions suspected of heresy, the most serious being the judgment of heresy with the subsequent declaration of anathema sit. But there are other levels or "grades" of theological error; a statement can be not outright heretical but be simply ambiguous. Some may not be heretical in that they deny a de fide doctrine, but that their conclusions could lead to thinking that would be heretical. Let's take a look at some of these theological censures.

Heretical propositions are divided into three groups according as they bear principally upon (1) the import (what is said) (2) the expression (how it is said) (3) the consequences (what they lead to).

Of import, we have hæretica (heretical), erronea (erroneous), hæresi proxima (next to heresy), errori proxima (next to error), temeratia (rash), etc. A "heretical" proposition is one that immediately and directly denies a de fide teaching. It is "erroneous" when it denies an article of faith that is certain (certa) but not de fide. "Next to heresy" and "next to error" means its opposition to a revealed and defined dogma is not certain, or chiefly when the truth it contradicts, though commonly accepted as revealed, has yet never been the object of a definition (proxima fidei). Something "next to heresy" could be defined as sapiens haeresim ( smakcing of heresy) or suspecta de hearesi, errorem (suspected of heresy or error). These are propositions which, though true textually, may due to modern currents of thought, be interpreted in a heretical way.

Next we come to the question of expression, or how the proposition is expressed. Here we ca define four censures: ambigua (ambiguous), captiosa (captious), male sonans (evil-sounding), piarum aurium offensiva (offensive to pious ears), etc. A proposition is ambiguous when it is worded so as to present two or more senses, one of which is objectionable; captious when acceptable words are made to express objectionable thoughts; evil-sounding when improper words are used to express otherwise acceptable truths; offensive when verbal expression is such as rightly to shock the Catholic sense and delicacy of faith.

Finally, we come to the question of consequences. Here we are dealing with what state of affairs the condemned propositions may lead to: subsannativa religionis (derisive of religion), decolorativa canodris ecclesiæ (defacing the beauty of the Church), subversiva hierarchiæ (subversive of the hierarchy), eversiva regnorum (destructive of governments), scandelosa, perniciosa, periculosa in moribus (scandalous, pernicious, dangerous to morals), blasphema, idolatra, superstisiosa, magica (blasphemous, leading to idolatry, superstition, sorcery), arrogans, acerba (arrogant, harsh), etc. This is not even an exhaustive list of the third group.

Now, here is the question: how many of these censures have you heard used in the past forty years? Yep. None. Why is there such a problem with ambiguity and misunderstanding in the Church? Sure, those who are guilty of it do it on purpose, we know. But if the Church's Magisterium would use the precise tools it has at its disposal to firmly define and divide the true from the false, these wolves in sheeps' clothing would be called out and would no longer be able to hide under the mantle of the Catholic name. The bottom line is, the Magisterium could take action against heresy and all of these other evils if it wanted to. It is just too timid to do so.
Posted by Boniface at 1:05 PM