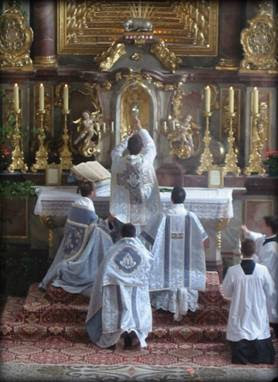 It usually that when one takes it upon themselves to be a commentator matters liturgical and (often times) takes the bishops and even the Pope to task for decisions that may not be in the best interest of the Church, people start to question your orthodoxy and wonder whether or not you are a schismatic, sedevecantist, or something worse. I thought, therefore, it prudent to put up a little statement about what the position of Anselm and I is regarding the liturgy, the Mass and the Second Vatican Council.

The way I see it, there are five possible positions one can take on the matter. They cover a broad spectrum, and all of these positions are found within the Church to one degree or another:

1) The Novus Ordo is wonderful, especially when it is a playground for liturgical creativity. Guitars, drums, Buddhist meditation, lay people giving the homily, feminist language, clowns; anything goes so long as the people are entertained. Anything prior to 1967 is suspect. 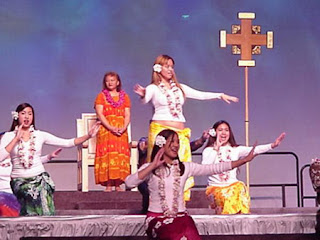 Liturgical abuse in Hawaii
2) The Novus Ordo, as it is celebrated in most parishes today, is acceptable. While clowns, guitars and Buddhism are seen as grave abuses, celebrating versus populum, in the vernacular, using Protestant hymns and sappy Haugen-Hass songs is deemed acceptable. I think most parishes fall in this category.

3) The Novus Ordo is the ordinary form of the Roman Rite and should be celebrated strictly according to the rubrics and in light of Church Tradition: this means ad orientam, in Latin, with communion rails, and so on. The abuses of positions 1 & 2 are condemned, but the Novus Ordo itself is upheld. An example of this position is Fr. Joseph Fessio.

4) The Novus Ordo, while being a valid form of the Mass validly promulgated by the legitimate Second Vatican Council, was nevertheless a terrible idea. Not only the abuses but the Mass itself are wrought with grave omissions and ambiguities. The Traditional Mass of Pius V should be the normative Mass of the Roman Rite and the Novus Ordo ought to be abolished, maybe gradually, maybe immediately, but in any case phased out. This position is in line with the concerns of the Ottaviani Intervention of 1967.

5) The Novus Ordo is an invalid Mass promulgated by a Council that was probably also invalid. Only the Mass of Pius V has any validity. The hierarchy has slipped into wholescale apostasy.

Now, position 1 is the one that attracts the most attention because the abuses are most grievous there. For this reason, most conservatives will expend most of their liturgical ire combating those in position 1. They are right to combat this position, for position 1 represents the most aggregious offense against God.

Position 2, the safe mainstream, is attacked also by conservatives, but not as vehemently. Most conservatives see no problem celebrating versus populum if the bishop has allowed it. For those in position 2, all options are equal in merit. They are in favor of girl altar servers if girl altar servers are allowed; but if tomorrow altar girls were forbidden, they would be ready with all of the reasons supporting the change. Whatever is the status quo is what they support.

Position 3 is that of what I would call the hardline conservatives, those who, like Fr. Fessio, want to see a strict implementation of the Novus Ordo. But the Novus Ordo itself, free from abuse, is just as good as the Traditional Mass; in fact, many will say it is better and will repeat the words of Paul VI and John Paul II that we needed a new rite of the Mass and that the liturgical renewal of Vatican II was somehow necessary.

So then, back to our original question; where do we at Unam Sanctam Catholicam fall? We would hover between position 3 and position 4: that the Novus Ordo is a valid Mass and that Vatican II was an authentic ecumenical council, but that the implementation of Vatican II, many of the Council documents, and certainly the liturgical reforms are full of problems. The surest route to a true restoration of Catholic Tradition is to restore the Rite of St. Pius V (ie, of Gregory the Great) as the missa normativa of the Roman Rite. The Novus Ordo ought to be cast off as a failed experiment (for that's what it truly is: a liturgical experiment, an artificial creation in a liturgical labratory, a test-tube baby of the Church with no precedent in Tradition), and the sooner it is done away with the better.

Hope this clears things up.
Posted by Boniface at 9:18 AM

seriously? you're position 4? you think the novus ordo is illicit?! are you suuuuure I can't show the boss this blog....?

Like you said.. if one goes with three why not just prefer the TLM? Option 3 makes the NO like a TLM and since the TLM is a fuller expression of the Catholic faith with more symbolism and fuller/explicit prayers it would make sense just to go with the TLM.

Unless someone stresses the dialogue aspect of the NO (which in a TLM, or rather I would say any Mass, is unnecessary), but I suppose they can have their dialogue TLMs... I suppose..

I think the higher you get in the numbers the clearer the distinction between one and the other. Number 2 people (like I was) would acquiesce in number 1 whereas number 4 people (like I am) would have to give some kind of assent to number 3 or number 5. Pride or discernment? Who knows?