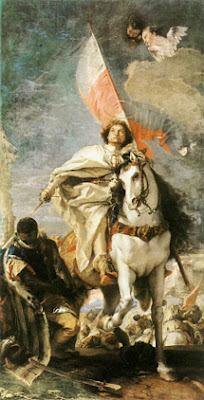 
"He (Mohammed) seduced the people by promises of carnal pleasure to which the concupiscence of the flesh urges us. His teaching also contained precepts that were in conformity with his promises, and he gave free rein to carnal pleasure. In all this, as is not unexpected; he was obeyed by carnal men. As for proofs of the truth of his doctrine, he brought forward only such as could be grasped by the natural ability of anyone with a very modest wisdom. Indeed, the truths that he taught he mingled with many fables and with doctrines of the greatest falsity.
He did not bring forth any signs produced in a supernatural way, which alone fittingly gives witness to divine inspiration; for a visible action that can be only divine reveals an invisibly inspired teacher of truth. On the Contrary, Mohammed said that he was sent in the power of his arms - which are signs not lacking even to robbers and tyrants. What is more, no wise men, men trained in things divine and human, believed in him from the beginning (1). Those who believed in him were brutal men and desert wanderers, utterly ignorant of all divine teaching, through whose numbers Mohammed forced others to become his follower's by the violence of his arms. Nor do divine pronouncements on part of preceding prophets offer him any witness. On the contrary, he perverts almost all the testimony of the Old and the New Testaments by making them into a fabrication of his own, as can be seen by anyone who examines his law. It was, therefore, a shrewd decision on his part to forbid his followers to read the Old and New Testaments, lest these books convict him of falsity. It is thus clear that those who place faith in his words believe foolishly." - Summa Contra Gentiles, Book 1, Chapter 16, Art. 4. Footnote: 1. Sura 21:5, Sura 44:14; Sura 16:103, Sura 37:36 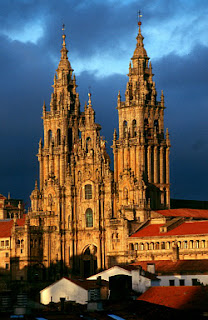 
This famous Catholic Church dedicated to St. James the Muslim-Slayer (Santiago Matamoros) houses the glorious Apostle's Holy Relics.
St. James, called the Greater, preached the Gospel in Judea, Samaria, and Spain. On his return to Jerusalem, Herod condemned him to death: he was beheaded in 42. His body was conveyed to Compostella (field of stars) in Spain, and is venerated by many pilgrims.
Be Thou, O Lord, the Sanctifier and Protector of Thy people: so that defended by the aid of Thine Apostle James, they may please Thee in thier manner of life, and serve Thee in peace of soul. Through our Lord Jesus Christ, Thy Son, Who liveth and reigneth with Thee, in the unity of the Holy Ghost, God, world without end. Amen.
Posted by Anselm at 11:04 AM

and another one – scroll down to under Ano 1998 - (as well as pictures of items from the museum) here:

You can see paintings of Santiago Matamoros and Mataindios together here: