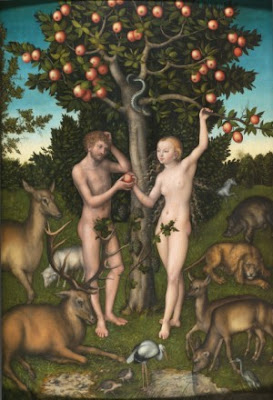 The image above shows Adam and Eve, after their Fall from grace, attempting to veil their nakedness with fig leaves. Ever since this original covering, veils and veiling have had a long pedigree in salvation history and in the Catholic Church. Here is another execerpt from Martin Mosebach's book The Heresy of Formlessness on the proper understanding of liturgical veiling:

The real meaning of veiling is given to us by the earliest mention of a veiling-a covering-that we find in Holy Scripture. After the Fall, Adam and Eve discovered to their horror "that they were naked", and they made clothes from leaves. There is something profoundly disturbing about this passage, for, according to the teaching of Genesis, man was created perfect; his nakedness was, not a defect, but an expression of his likeness to God. After the breaking of God's command, the defect is suddenly there, although man remains outwardly unchanged. He has lost something; it is not there, and it awakens a sense of loss within him. Theology calls this defect the loss of grace. Man clumsily tries to make up for this loss. He puts clothes on to try to regain the radiance that had formerly surrounded him.
Veiling, therefore, becomes a visible sign of the nimbus of grace and holiness that has become invisible to human eyes. Veiling, in the liturgy, is the halo that is by nature appropriate to the sacred vessels and their even more sacred contents. This must never be forgotten if these vessels, signs, and Hosts are to be correctely understood. Veiling, in the liturgy, is not intended to withdraw some object from view, to make a mystery out of it, or to conceal its appearance. The appearance of the veiled things is common knowledge anyway. But their outward appearance tells us nothing about their real nature. It is the veil that indicates this.
If one wanted to formulate a theological doctrine of the veil, one could say that God's creation is real, but this reality, this ability to be real, is weakened because of original sin. Its lack of reality, its lost ability to radiate beyond itself and manifest itself as the Creator's thought is designated by the veil that represents this radiance...In this context, a liturgy that renounces all veiling has nothing to say. Presenting us with nothing but naked materiality, it takes account neither of creation's supernatural perfection nor of the world's need of redemption (Mosebach, 171-173).
In the Traditional Latin Mass, veiling was commonplace; everything was veiled in one way or another. The sacred vessels all had veils proper to them, and the communion rails were a kind of veil delineating the sacred space of the nave apart from the congregation. The liturgical vestments of the priest are a kind of veil; each vestment represented a certain virtue, and all of them together represented the "New Man" that the priest sacramentally becomes as he offers the sacrifice and that every Christian will become on the day of resurrection when our lowly bodies are clothed in resplendent glory. The priest's body itself, in the Old Mass, is a type of veil that hides the mystery of the sacrifice, like a living iconostasis.
In the Mass of Pope Paul VI, nothing is veiled. The only veiling left is (perhaps) the veiling of images on Holy Week, but this has often gave way to artificial and stupid practices like emptying the holy water fonts and putting sand in them (real nice emptying the fonts of their sacramental holy water during the season when we all need it the most!). As Mosebach says, when we remove the veils, we lose the mystery of what we are doing at Mass, of the holiness of the vessels and their contents, of the mystery of Christ's death and even of our own transformation in Him. It may just be a symbolic gesture, but a religious devoid of symbol is nothing but a cold mental abstraction, a religion of philosophers and professors, not the faith of the common man and certainly not the faith of the God-Man who so loved matter that he became it for our salvation and continues to become it every time the priest says the words of consecration.
Posted by Boniface at 2:27 PM