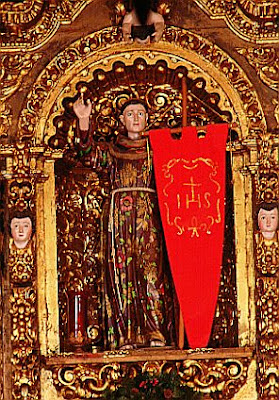 Today is the feast of St. John Capistrano (1385-1456), the venerable Franciscan friar (and Cardinal) who expended his life on missions for the papacy and in the service of Christendom. He is best remembered for his role in urging the Hungarian crusade of 1456 which led to the defeat of the Turks and Mehmet II at the Battle of Belgrade in 1456. The stress of preaching the crusade and a sickness which he caught following the battle brought about his death on this day in 1456, only a few months after Janos Hunyadi, military leader of the crusade, succumbed to plague.

St. John was originally married, but in a dream St. Francis appeared to him and warned him to go into religious life. As the marriage was not yet consummated, he obtained a dispensation and entered the Franciscans in 1416 where he was a student of St. Bernardine of Siena. The Catholic Encyclopedia relates:
He traversed the whole of Italy; and so great were the crowds who came to listen to him that he often had to preach in the public squares. At the time of his preaching all business stopped. At Brescia on one occasion he preached to a crowd of one hundred and twenty-six thousand people, who had come from all the neighbouring provinces. On another occasion during a mission, over two thousand sick people were brought to him that he might sign them with the sign of the Cross, so great was his fame as a healer of the sick. Like St. Bernardine of Siena he greatly propagated devotion to the Holy Name of Jesus, and, together with that saint, was accused of heresy because of this devotion. While he was thus carrying on his apostolic work, he was actively engaged in assisting St. Bernardine in the reform of the Franciscan Order. In 1429 John, together with other Observant friars, was cited to Rome on the charge of heresy, and he was chosen by his companions to defend their cause; the friars were acquitted by the commission of cardinals.
In 1454, John was summoned to the Diet of Frankfort for the purpose of assisting in coming up with a plan of crusade against the Turks. He preached the crusade tirelessly in Vienna, Austria and lower Germany and actually went to Hungary to implement the holy war. His preaching swelled the armies of Janos Hunyadi to the thousands and the friar himself led the left wing of the Christian army against the Turks in victory outside Belgrade. As mentioned above, he died shortly afterwards at the venerable age of seventy-one. He was beatified in 1694 (only eleven years after the Catholic victory over the Turks at Vienna under Jan Sobieski, which bore striking resemblance to the Belgrade victory) and was canonized in 1724.
St. John Capistrano, ora pro nobis!
Click here for another article on St. John Capistrano.
Click here for the Battle of Belgrade (1456).
Posted by Boniface at 12:13 PM