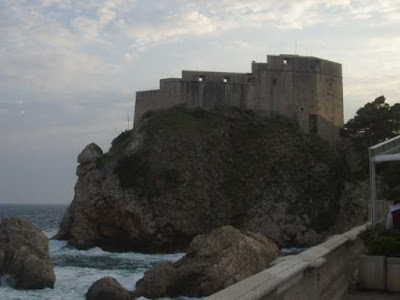 I have often made the assertion on this blog (and I have seen it repeated on other blogs) that the age we are living in now is like a new Dark Ages. The difference is this: the original Dark Ages were only dark for civilization but were bright times for the Church, which by its long list of saints and scholars made the early Middle Ages one of the best eras for Church growth in wisdom and piety. By contrast, the current Dark Ages are dark for the Church while the external forms of civilization (though not its substance) seem to be flourishing.

In the Dark Ages, learning was preserved in small fortresses of education: the monasteries. This brings me to consider the following question: where, if anywhere, is the true faith being passed on the most? Where are the strongholds of traditionalism, from which the forces of Catholic truth can sally forth and wreak havoc on the secular-liberal barbarians of our time?
I think there are five main locations where Traditionalism is really putting down roots and influencing the Church at large. What do I mean by "influencing?" I mean they have (a) not just preserved Tradition, but are making efforts to spread it to other places (b) they contribute in someway to either organization, providing resources, training, or information to efforts aimed at restoring Catholic Tradition, and (c) they seem to be gaining momentum/support from the Church and laity alike. I will rank them here, from least influential to most:
Fifth place goes to the old indult parishes. These faithful little communities carried on the Tridentine Mass and Gregorian Chant through decades when almost all of the Church was going against them. I salute them for their preservation. However, over the years I think some developed a defensive mentality and lacked in evangelical fervor. I also want to mention the SSPX chapels around the country, though I'd say those, too, did little to spread Traditional Catholicism and more or less just preserved what they had. Their awkward canonical situation mitigated their effectiveness to a large degree. Soem may take issue with this, but the few SSPX communities that I know of were very closed.
Fourth place goes to Catholic institutions of higher learning that are favorable to Catholic Tradition and to the Old Mass: I single out Christendom College, University of Dallas, the International Theological Institute in Gaming, Austria, as well as the old Ave Maria College in Michigan prior to its tragic dismantling by Tom Monaghan. I emphatically do not mention Stubenville because I think its emphasis on "praise and worship" does not really endear it to Traditionalists, though I know there are Traditionalist enclaves there. Nor do I mention Ave Maria University in Florida, where the Extraordinary Form is subject to repression (see this article from Ave Watch).
Third place belongs to the various Gregorian Chant workshops around the world, like the Church Music Association of America, the Adoremus Society for the Renewal of the Sacred Liturgy, and the training sessions offered Fr. Anthony Ross of Collegeville, Minnesota. These events often draw in many people who are at first only mildly interested in Catholic musical tradition and by the end leave them devoted Traditionalists, converted by the beauty of the Church's timeless music.
Second place belongs to clerical and lay organizations dedicated to spreading the use of the Traditional Latin Mass, like the FSSP, the Institute of Christ the King Sovereign Priest, Una Voce, the Benedictines of Fontgambault, the Canons Regular of St. John Cantius and Coalition Ecclesia Dei. These groups have proven to be pivotal in the spread of respect for the Church's Tradition and in making avaliable resources for parishes and priests who choose to celebrate according to the Extraordinary Form. We also know that when diocese are friendly to them (ala Fabian Bruskewitz) that they seldom lack vocations.
And the first place, the most influential fortress of Traditionalism contributing to the renewal of the Catholic Church and liturgy in the world is:

The Blogosphere!
That's right: via the Internet, Traditionalists are connected in ways they never were before. Blogs like the New Liturgical Movement and Fr. Zuhlsdorf's "What Does the Prayer Really Say?" have done more to advance the cause for Church Tradition than anything else. Because of them, Trads have realized that they are not alone and that they constitute a very potent force within the Church. Blogging has connected everybody into a united groundswell of support for the Church's authentic Tradition.
What do you think of this ranking? Do you agree with it or disagree? Are there any I have left out? I know we could mention isolated individual members of the hierarchy, but I did not think they compared in influence (unless we count Benedict XVI, who would be in a category all of his own). Let me hear your feedback.
Posted by Boniface at 4:05 PM

Basically, I agree with your assessment. A few points about Fourth Place. One, I think there are probably way more colleges and universities in the US to give kudos to. For instance, of all places, Notre Dame has apparently been very responsive to offering the TLM. And I happen to know that the new Wyoming Catholic College will also offer a regular TLM beginning in the next months. Second, while the International Theological Institute is surely THE place on earth "from which the forces of Catholic truth can sally forth and wreak havoc on the secular-liberal barbarians of our time" in terms of is theological curriculum and love of St. Thomas Aquinas, its relationship with the TLM is somewhat overstated here. There hasn't been a TLM at ITI in at least 2 years, not counting an occasional private Mass during the summer by a visiting priest, although there are TLM aficionados among the students and faculty. The Ordinary Form is celebrated with due dignity, chant, and Latin.

I kind of agree with you about the ITI, but remember that in my criteria for what qualified as a place that was influential, I did not specifically mention the TLM, though that obviously is a big part. The criteria were:

(a) not just preserved Tradition, but are making efforts to spread it to other places (b) they contribute in someway to either organization, providing resources, training, or information to efforts aimed at restoring Catholic Tradition, and (c) they seem to be gaining momentum/support from the Church and laity alike.

Today the TLM was celebrated at the ITI in Gaming, but unfortunately the priest who offers this Mass only teaches a class here every other friday, and so for now at least, the TLM looks like it will be bi-weekly.

As far as traditional liturgy goes at the ITI, though, let's not forget the regular Byzantine Divine Liturgies, which are very beautiful and reverent. (Need I say that I attend these instead of the NO Masses? Although, as has been mentioned above, even the NO Masses are done with what dignity the ritual allows.)

Boniface: Thanks for the clarification. I agree with that.

Anselm: I didn't know he was celebrating Mass! ITI would benefit greatly if they could get him full-time.