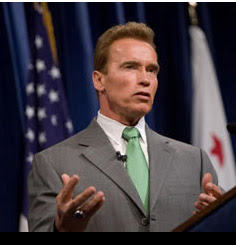 As the saying goes, California is a country unto itself, which draws all the biggest nutcases and liberal wackos. Two new laws (called SB777 and AB14), signed by Gov. Arnold Schwarzenegger, make the following provisions:

The use of the terms "mom", "dad" and "husband" and "wife" are to be banned from usage in the schools unless corresponding terms relating to gay couples are also included. Simply saying "mom" and "dad" promotes a discriminatory bias.
Also signed was AB394, which targets parents and teachers for such pro-gay indoctrination through "anti-harassment" training, CCF said.
Prohibits any "instruction" or school-sponsored "activity" that "promotes a discriminatory bias" against "gender" – the bill's definition includes cross-dressing and sex changes – as well as "sexual orientation." Offenders will face the wrath of the state Department of Education, up to and including lawsuits.
An Index of Forbidden books is to be established; on the banned list will be any text, reference or teaching aid that portrays marriage as only between a man and woman, materials that say people are born male or female (and not in between), sources that fail to include a variety of transsexual, bisexual and homosexual historical figures, and sex education materials that fail to offer the option of sex changes.
Homecoming kings now can be either male or female – as can homecoming queens.
Most outrageously: students, whether male or female, must be allowed to use the restroom and locker room corresponding to the sex with which they choose to identify.
AB394 promotes the same issues through state-funded publications, postings, curricula and handouts to students, parents and teachers.
Creates the circumstances where a parent who says marriage is only for a man and a woman in the presence of a lesbian teacher could be convicted of "harassment," and a student who believes people are born either male or female could be reported as a "harasser" by a male teacher who wears women's clothes.
Prohibits state funding for any program that does not support a range of alternative sexual practices, including state-funded social services run by churches. Affected will be day care centers, preschool or after-school programs, food and housing programs, senior services, anti-gang efforts, jobs programs and others.
I want to say that it is unbelievable that this could happen in America, but I have seen way too much already to think anything is unbelievable anymore. I am simply flabbergasted by this law; normally, I'd have some commentary on it, but today I don't. I simply read it and am shocked. I think we ought to pray fervently for Gov. Schwarzenegger's conversion; but we ought to ask God (Who knows all hearts), that if the governor won't repent, that he would then be removed from this earth so that he can stop assisting in the dragging of other innocent souls to hell.
If you'd like to see the full article from World Net Daily that chronicles these abominations, click here.
Posted by Boniface at 1:43 PM