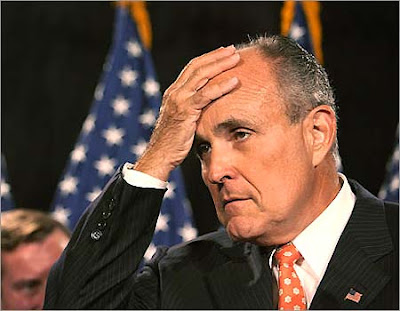 As always, Giuliani and the media attempted to play the "don't judge" card against Burke. When asked to comment on Burke's statement, Giuliani said, "Archbishops have a right to their opinion, you know. There's freedom of religion in this country. There's no established religion, and archbishops have a right to their opinion. Everybody has a right to their opinion." That's nice, except this has nothing to do with "freedom of religion." It has to do with clergy of a respective religion being able to enforce the moral dictates of that particular religion, which in this case includes denying Communion to persons in a state of grave, persistent public sin, like Giuliani.

The media tried to catch Burke in a contradiction by asking him if he would deny communion to those who support the death-penalty or preemptive war, to which Burke responded, "It's a little more complicated in that case." Of course, the media sees abortion and preemptive war as equal in value, when they are certainly not. Everybody who has ever taken Moral Theology 101 knows that the application of the death-penalty or of a war are prudential matters that may or may not be evil depending on circumstances; but abortion is intrinsically evil and must always be opposed. Another kudos to Burke for making this differentiation.

Also in response to Burke, Giuliani came back with the standard, "I'm guided very, very often about, 'Don't judge others, lest you be judged." Raymond Burke gave an excellent rebuttal to this when he responded that a denial of Communion was not "judgment." Canon law and Church discipline can only judge exterior acts, not interior dispositions. "What the state of his soul is is between God and him," Burke said, but reiterated that, judging by external actions, Giuliani was in a state of objective, persistent and public sin (his strong support of abortion and his multiple divorce and remarriages; only his first marriage was annulled). Therefore, Church discipline says that he should not receive the Sacrament.

But now look at this odd comment by Giuliani from August, 2007. When a voter in Iowa asked him if he was a "traditional, practicing Roman Catholic," he said: "My religious affiliation, my religious practices and the degree to which I am a good or not-so-good Catholic, I prefer to leave to the priests." So if he wants it left to the priests, doesn't that mean that Archbishop Burke is qualified to speak on his situation? But when a cleric does speak out, Giuliani says "Oh, that's just his opinion!"

One final odd Giuliani statement: "I have very, very strong views on religion that come about from having wanted to be a priest when I was younger, having studied theology for four years in college." Presumably this refers to his time at Bishop Loughlin Memorial High and Manhattan College. If we look at his bio, we see that he was born in 1944 and that his college years were from 1961-1965, not exactly the best time in this country to have been studying theology, as Giuliani claims to have.

Giuliani closed his comments with the sorry old line of saying that he personally accepted Christianity, but didn't want to impose it on others: "So it's a very, very important part of my life," he said. "But I think in a democracy and in a government like ours, my religion is my way of looking at God, and other people have other ways of doing it, and some people don't believe in God. I think that's unfortunate. I think their life would be a lot fuller if they did, but they have that right."

I pray that no Catholics vote for false-Catholic Rudy Giuliani. To have an apostate, liberal pro-Choice thrice-divorced and remarried "Catholic" in the White House would not only be a slap in the face to the Catholic Church, but would be a stain upon the office of the Presidency (which is already stained as it is!). This is another example of an American Catholic thinking that the universal laws, customs and doctrines of the Church somehow don't apply to him because "we have freedom of religion." This is the heresy of Americanism at its worst.
Posted by Boniface at 1:26 PM