If you're gonna do it wrong, at least do it right! 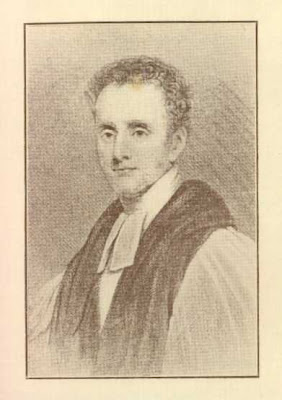 Reginald Heber (1783-1826): Anglican bishop and author of "Holy, Holy, Holy"
Everybody knows that we are not even supposed to be using "hymns" in the liturgy, at least as far as the word denotes the standard, Protestant written 1800's hymn composed by people like the Wesley's and John Newton. As many liturgical documents have attested, Gregorian Chant is to be given pride of place and remains the official music most suited to the Roman Rite.

That being the case, if somebody forced me to choose between Victorian-era traditional Protestant hymns (ones that aren't explicitly contrary to Catholic dogma, of course) and the latest Catholic stuff by Haugen-Hass, I'd choose the Protestant hymns in a heartbeat. At least the Protestant hymns uphold doctrines like the sinfulness of man, the need for Christ's grace, the importance of Christ's atoning death. At least the Protestant hymns, Protestant though they be, still remain essentially "vertical" in their theology. By contrast, the stuff of Haugen-Hass is "horizontal" to the core. That is why I can sing "Holy, Holy, Holy" by the Anglican Reginald Heber much more easily than I can sing "Gather Us In" by Marty Haugen (not to mention the fact that "Holy, Holy Holy" has much better music). So, given a choice between Haugen and Victorian-era Protestant hymns, the classical Protestant hymns win hands down. I know it is not the best choice; it is a lesser of two evils since so often in parish life Gregorian Chant is simply not an option.

But, if we are going to use the old 1800's hymns (which we shouldn't be doing), then let's at least sing them properly! I am referring to the horrible practice of the modern publishers and editors of sacred music, companies like GIA Publications, Inc., of altering the words to these old hymns on the sly in order to inject a liberal theological agenda. That they edit is bad enough in itself, but even worse is that they do not let the layman know that the lyrics he is singing have been sanitized, thus leaving the uneducated person thinking that he is really singing the hymn the way it was written.

Notice the subtle change in the 2nd line of the verse? The original reads "Though the eye of sinful man Thy glory may not see." In Heber's original, all mankind is implicated in sin. It is man who is sinful in Heber's original. Now, in the GIA version, this line has been replaced by, "Though the eye made blind by sin Thy glory may not see." This line is not as universal; it seems to imply that some people are free from sin. This is undoubtedly meant to lift the self-esteem of the singer of this sanitized hymn by creating a mental separation between himself and "the eye made blind by sin." In the original, even the singer himself is implicated in the sins of man, for it says, "though the eye of sinful man." The new version is meant to give people good feelings and winds up causing spiritual pride.

The worst thing about these alterations is that when one looks at the bottom of the page, where all the author's information is, we see no acknowledgement that there has been any alteration at all. For example, in the GIA version of "Holy, Holy, Holy", it simply says, "Text: Reginald Heber, 1783-1826, alt." There is no mention that the lyrics have been changed, unless that little "alt" at the end is short for "alternate lyrics have been inserted into this song." Even if it does mean that, it does not tell the reader where. Most people never read those little lines at the bottom anyway. So we are left thinking that everybody who ever wrote hymns in the past had the same sappy, feel-good attitudes that our present Church shares.

Again, we should not even be singing these Protestant hymns. But if we are, let's at least sing the words the way they are supposed to be. By the way, in case you are thinking that perhaps it is good that we do not call ourselves "wretches" and "sinners", look at how St. Francis of Assisi, one of the greatest of all saints, referred to himself: “Who are you, O God of sweetness, and who am I, base worm and your lowly servant?" If Francis was not afraid to refer to himself as a base worm, why should we be put off by admitting the simple fact that we are sinners in need of God's grace? Has the Catholic Church become afraid of Christ's saying: "If we say we have no sin, we deceive ourselves, and the truth is not in us" (1 Jn.1:8).

Here is a hilarious post on how to compose a Marty Haugen song.
Posted by Boniface at 9:36 AM