I hope the Pope doesn't fall for this one... 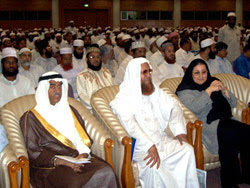 A body of 38 Muslim scholars has sent a petition to Pope Benedict XVI asking for more cooperation between Catholic and Muslims in promoting world peace. I hope the pope doesn't fall for this! First of all, Islam does not promote peace, except only as a means to furthering the end of global jihad. Secondly, though the document does not mention prayer specifically, it is worth pointing out that communio in sacris with heretics or pagans is never permitted. The only time it is justified, according to Church doctrine, is with Separated Brethren, but only for the purpose of praying for their reunion with Rome. So, let's hope the Pope does not go off offering to have prayer gathering with these Muslims. I think he is pretty solid, but he also feels much pressure to conform to the lamentable standard set by John Paul II. Below is the article from Zenit.org:


Muslim scholars have written to Benedict XVI and the heads of Christian churches to propose that the two faiths cooperate in creating peace and understanding in the world.Thursday's text comes a year after 38 Muslim scholars sent an open letter to the Pope in the wake of his address given at the University of Regensburg in September. The discourse had sparked controversy among some Muslim circles.The 138 signatories of this year's letter offer an open invitation to Christians to unite with Muslims over what is most essential to their respective faiths -- the commandment of love.With over a half of the world's population consisting of Muslims and Christians, the letter's authors believe that easing world tensions can only come from peace and justice between these two faiths.The document calls for tolerance, understanding and moderation, and is signed by Muslim leaders, politicians and academics.
Posted by Boniface at 9:33 AM

Right on..... the last thing we need is another Prayer Meeting At Assisi.

However, as much as I abhor praying "with" them, let us always pray for them......