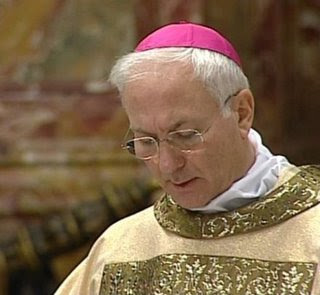 Monday the Vatican announced that Archbishop Piero Marini, Master of Ceremonies for the late John Paul II, will be replaced by Msgr. Guido Marini (no relation). The Master of Ceremonies is the person in charge of organizing all of the papal masses around the world. For example, Piero Marini was directly responsible for:
This is just a brief list; we could go on and on. Concerning the controversial "exorcism" of John Paul II by Mayan women, Marini recalled in 2003, “We discussed it a great deal here in this office with the responsible parties from the local church. I spoke with the bishop. At the beginning, I have to say I was against using this rite, which not even they seemed to understand very well. Obviously our penitential act is one thing, their expression is another. But we continued talking, and in the end this was not during the Eucharistic celebration, and the bishop wanted the rite at any cost. It was important as a sign of respect for the indigenous, but it’s also a matter of liturgical history. Often rites that were not originally Christian have been ‘Christianized.’ If the indigenous have this rite, it can with time take on a Christian meaning concerning the purification of sins. Just as we use holy water, which for us recalls the waters of baptism, forgiveness of sins and the resurrection, so for them this element of smoke can have a sense of liberation and forgiveness. This is the reason for which we at the end agreed to insert this element.”

This thinking is problematic for so many reasons, but let me just point out a few things. First, isn't it interesting that Marini says of the local bishops that "not even they seemed to understand [the Mayan rite] very well." The bishop's job is to regulate the liturgy in his diocese (as the bishops are so fond of pointing out with regards to the MP). Why would the bishop allow a pagan rite that he "didn't seem to understand very well"? This is crazy.

Second, notice that Marini said that "the bishop wanted the rite at any cost." At any cost? That phrase should tell us something about the liturgical mentality. Did Marini protest? Not at all; as Marini said, they "at the end agreed to insert this element.” Since when to people have the right to "insert" things into the sacred liturgy? And since when is this decided upon by a discussion between bishops? Marini's comparison of intentionally inserting pagan elements arbitrarily into the liturgy is completely different from the organic and gradual Christianization of the pagan religions of old, which took hundreds of years and happened naturally. 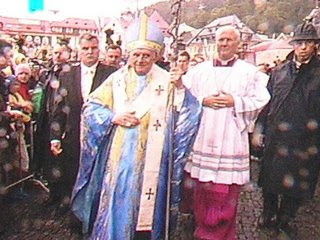 Some speculated that Marini's arrangement of the Pope Benedict's wacky tye-dyed garb at the Mariazell shrine last month was the last straw. By the way, do you know what Piero Marini did before he was Archbishop? He was secretary to an Archbishop named Annibale Bugnini. Hmm...Marini is being replaced by Msgr. Guido Marini, who curiously enough has little background in liturgy (he was master of ceremonies for Tarsicio Bertone) but is rather a specialist in canon law and spirituality. Some have speculated that this will make future papal Masses more legalist and canonical and less "pastoral," something I think would be absolutely wonderful. The driving desire to be "pastoral" has been the bane of the post-conciliar Church.

As for why the old Marini was kept around for so long, I can only speculate. Why John Paul II allowed his own Masses to be circuses all the while he was trying to tighten up discipline in other areas is a mystery to me, as John Paul himself is a mystery. It is evident that Marini's actions gave a tacit approval to every other liturgical innovator around the world. "Well, the Pope has liturgical dancers at his Masses, so it must be okay for us to do it!" We ought to thank God that this one-time secretary to Bugnini has finally been removed. Benedict made him President of the Pontifical Commission for International Eucharistic Congresses, a place where he will be able to cause less trouble directly. It was widely known, as well, that Marini privately had serious misgivings about Benedict XVI's Summorum Pontificum. That's hardly surprising, given his history!

Praise God for yet another wonderful action by His Holiness Pope Benedict XVI!

For a 2003 interview with Piero Marini, including his views on inculturation and liturgical dancing, check out this article.
Posted by Boniface at 1:57 PM

Why John Paul II allowed his own Masses to be circuses all the while he was trying to tighten up discipline in other areas is a mystery to me, as John Paul himself is a mystery.

It’s probably because he was too nice. But then again why let confusion and scandal go one without stopping it and/or issuing apologies or condemnations of it later on?

This reminds me Athanasius’ recent post on why JPII should not be canonized. A good guy, but a bad Pope.