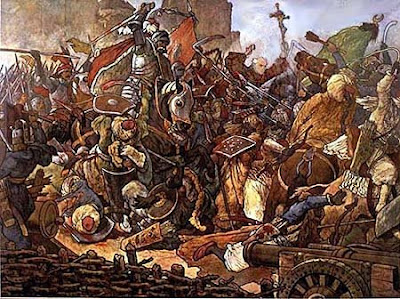 We all know of the spectacular Catholic victories against the Muslims at Poitiers (732), Jerusalem (1099), Lepanto (1571) and Vienna (1683), as well as the great leaders of those campaingns: Charles Martel, Godfrey de Bouillon, Don Juan of Austria and Jan Sobieski of Poland. But how many of us have ever heard of the no less pivotal Battle of Belgrade in 1456 and the great Catholic Hungarian warlord Janos Hunyadi?

After the fall of Constantinople in 1453, the Turkish advance did not simply cease; Mehmet II, the victor of Constantinople, geared up his forces for an invasion of the Catholic Balkans. His immediate goal was to take the Hungarian fortress-town of Belgrade (then called Nandofehervar) on the border of Hungary and the newly possessed Ottoman lands. Hungary was in a precarious situation, as it had no strong centralized kingship at the time and had been torn by baronial rivalries in the years leading up to the battle. The most powerful of these lords was Janos Hunyadi, a Serb and veteran of many wars against the Turks. Seeing the fall of Constantinople and the imminent invasion of the Turks, Hunyadi quickly made peace with his enemies and united the Hungarians against the coming infidel wave. He built up many fortresses and supplied garrisons out of his own revenues. However, no other baron was willing to assist him against the Turks, partly because they thought it a lost cause, and partly because even at this late hour with the Turks at the door, they feared empowering Hunyadi too much at their own expense. Thus Hunyadi stood alone against the Ottomans.

He did have a faithful ally in St. John Capistrano, a Francsican monk who preached a crusade against the Turk so effectively that the peasants and farmers all rose up to join Hunyadi, swelling his forces to about 25,000 men. At the very moment Hunyadi was assembling his peasant force, Mehmet II arrived at Belgrade with a seasoned force of about 70,000 Ottoman warriors, most of them veterans of Constantinople. The siege of Belgrade was commenced on July 4th, 1456. Hunyadi was still a few days away from the city recruiting cavalry for his relief effort.

When Hunyadi heard about the siege, he linked up with St. John Capistrano and made his way for Belgarde, the preaching of the friar having now swollen the Hungarian force to close to 50,000, most of them ill equipped and untrained peasants. Meanwhile, Mehmet II pounded away at the walls of Belgrade with his heavy cannons, the same cannons that had levelled the ancient walls of Constantinople. The defenders waited in fearful expectation. The Turks had set up a naval blockade on the Danube in order to protect against any advance from the south. 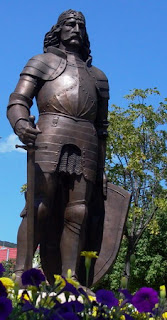 Hunyadi arrived at Belgrade on July 14th and destroyed the flotilla of the Turks in a single day, sinking three Turkish galleys and capturing twenty-four ships. Meanwhile, Mehmet's cannons had finally breached the walls of the city, and an all out assault was ordered on the 21st of July. Hunyadi, now within the city, ordered a fierce resistance, and flaming pitch and burning wood were hurled at the defenders. Once, a Turkish soldier managed to plant the Sultan's flag on the pinnacle of the castle, but he was grabbed by a Hungarian soldier, and the Turk, Hungarian and flag all fell from the castle and perished. The Turks were beat back for the day, but only barely.

The following day a miracle occured. Apparently by spontaneous impulse, without any orders from Hunyadi or Capistrano, the Christian rabble decided to sally outside of the castle and ravage the Turkish ramparts. The force was soon reinforced by 2,000 Crusaders, and before anybody knew what was going on, the Turks began to take flight. Panic spread throughout the Turkish camp, and the Catholic force of only a few thousand began to rout the conquerors of Constantinople. The Sultan's bodyguard of about 5,000 Janissaries tried desperately to stop the panic and recapture the camp, but by that time Hunyadi's army had also joined the unplanned battle, and the Turkish efforts became hopeless. The Sultan Mehmet II himself advanced into the fight but took an arrow in the thigh and was rendered unconscious. The rout turned into a general panic, and the Catholic army raged upon the Ottoman force with much slaughter; almost all of Mehmet's captains were killed.

When the Sultan regained consciousness, he was so distraught at the disaster that he had to be prevented from killing himself. The wounded were withdrawn in 140 wagons and Mehmet sulked back to Constantinople, the Turkish advance thus halted for the next century. During the siege, Pope Callixtus III ordered the noon bell to call believers to pray for the defenders - but as in many places the news of victory arrived earlier than the order, it transformed into the commemoration of the victory, and the Pope modified his the order to fit this interpretation. Hence the noon bell is still rung to this day for the memory of Hunyadi's victory.

Hunyadi's total force never exceeded 50,000, and the Turkish force was about 70,000, perhaps as high as 100,000. Nevertheless, the Hungarians lost only 10,000 men, and the Turks over 50,000, more than half of their army. But the Hungarians paid dearly for their victory: the carnage caused a plague to break out in the camp, which killed Hunyadi only weeks after the victory. A few weeks after that, Capistrano succumbed as well.

Though Belgrade eventually fell to the Turks in 1521, the Battle of Belgrade and Janos Hunyadi deserve to be remembered along with Don Juan and Jan Sobieski as defenders of Christendom; indeed, as its avenging angel, since it was Hunyadi's forces who killed all the warlords who had taken Constantinople and who wounded the proud Mehmet II and inflicted such disaster on him that he wanted to kill himself.

Another significant fact about this victory is that it was a priest, and a Catholic Saint at that, helped lead an army to victory; he wasn't just a kibitzer.

You left out a significant historical battle which resulted in a victory by Christian armies against the forces of Islam, that should be given honorable mention: The Battle of Montgisard, November 25, 1177 AD.