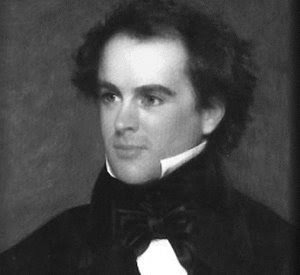 Nathaniel Hawthorne as a young man
This fall I have been reading Nathaniel Hawthorne's Tales, edited by James McIntosh. Being a Traditional Catholic, I was unsure how much I would enjoy this writer of post-Revolutionary America (Hawthorne lived from 1804-1864) whose short stories take place mainly in Puritan New England. However, not only have I been greatly amused and delighted by Hawthorne's tales, but this author of the Romantic school has what one could call a natural affinity for Catholicism and a Catholic world view. This is often true of the Romantics: in opposing themselves to the cold logic of the Rationalists, they oftentimes come out siding with the enemies of those men of Reason, the Catholics. However, Romanticist love of Catholicism has little to do with theological adherence to truth and more to aesthetic sentimentality.

However, more than once this aesthetic respect for the Church has led to actual conversions. Hawthorne himself became very close to the Church towards the end of his life and it is a well known fact that his youngest daughter, Rose Hawthorne (Lathrup), converted to the Faith and became a nun.

Also, though of Puritan New-England stock, Hawthorne is no friend to the grim settlers of Massachussetts Bay and Plymouth. This is evident in such tales as Young Goodmand Brown (1835), the Scarlett Letter (1850) and the Maypole of Merrimount (1837), in the latter of which he says the following about the Puritans of the 1630's:

"Puritans [were] most dismal wretches, who said their prayers before daylight, and then wrought in the forest of cornfield, till evening made it prayer time again. Their weapons were always at hand, to shoot down the straggling savage. When they met in conclave, it was never to keep up the old English mirth, but to hear sermons three hours long, or to proclaim bounties on the heads of wolves and scalps of Indians. Their festivals were fast-days, and their chief pastime the singing of psalms. Woe to the youth or maiden, who did but dream of a dance! The select-man nodded to the constable; and there sat the light-heeled reprobate in the stocks; or if he danced, it was round the whipping-post, which might be termed the Puritan May-Pole."

Despite any religious or cultural undertones, Hawthorne is a truly good writer and his brief stories (usually no more than five pages) are very enjoyable to read. My favorite Hawthorne passage comes from Roger Malvin's Burial (1831); in this passage, Hawthorne attempts to explain the motivations of those who came to the New World to hack out homes for themselves out of the unfriendly wilderness:

"O, who, in the enthusiasm of a daydream, has not wished that he were a wanderer in a world of summer wilderness, with one fair and gentle being hanging lightly on his arm? In youth his free and exulting step would know no barrier but the rolling ocean or the snow-topped mountains; calmer manhood would choose a home where Nature had strewn a double wealth in the vale of some transparent stream; and when hoary age, after long, long years of theat pure life, stole on and found him there, it would find him the father of a race, the patriarch of a people, the founder of a mighty nation yet to be. When death, like the sweet sleep which we welcome after a day of happiness, came over him, his far descendants would mourn over the venerated dust. Enveloped by tradition in mysterious attributes, the men of future generations would call him godlike; and remote posterity would see him standing, dimly glorious, far up the valley of a hundred centuries."

Click here for a brief article on the life and work of Hawthorne's Catholic daughter, Rose Lathrup (Mother Mary Alphonsa Lathrup).
Posted by Boniface at 10:26 AM