Why is this awful movie a "Catholic classic?" 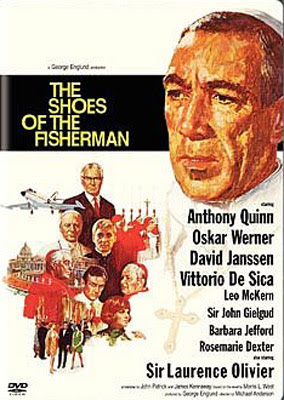 In every Catholic book and movie catalog I look through, the 1968 movie "The Shoes of the Fisherman" starring Anthony Quinn is listed in the "Catholic classics" section. This movie has been perennially popular among Catholics for a generation and in its day it was nominated for two oscars, won a Golden Globe and was nominated (and awarded) a few lesser awards. I thought I ought to rent this movie and see what all the acclaim was, so one night my wife and I settled down to watch "The Shoes of the Fisherman" and were soundly disappointed, especially since after almost forty years the obvious political-liberal themes of the movie were still woefully apparent.

The theme is this: Set in the late 1980's, Ukrainian Archbishop Kiril Lakota (Quinn) is set free after two decades as a political prisoner in Siberia. He is brought to Rome by Fr. David Telemond, a troubled young priest who befriends him. Once at the Vatican, he is immediately given an audience with the Pope, who elevates him to Cardinal Priest. The world is on the brink of war due to a Chinese-Soviet feud made worse by a famine caused by trade restrictions brought against China by the U.S. When the Pontiff suddenly dies, Lakota's genuine character and unique experience move the College of Cardinals to elect him as the new Pope. But Pope Kiril I must now deal with his own self-doubt, the struggle of his friend Fr. Telemond who is under scrutiny for his beliefs, and find a solution to the crisis in China.

This film is problematic for several reasons: first and foremost, the Pontiff in this movie, Kiril Lakota (who arrogantly takes his own real name as his pontifical name, becoming "Kiril I"), is portrayed as more of a political diplomat than a priest. Many popes have been diplomats, of course (Pius XII), but they have also been popes. This pope is all diplomat and no pope. He spends the majority of the movie trying to find a political solution between a fictitious quarrel between China and Russia. Besides refusing to take a pontifical name, he refuses to wear his ecclesiastical garments when meeting with the Russians and Chinese Communists (so as not to offend them) and instead wears a suit and tie.

Another problem witht his movie is the character of Fr. Telamond, a priest who befriends Pope Kiril and who advocates evolutionary views of the faith (a "cosmic Christ"). The pope does not understand his teachings, but nevertheless fails to really condemn them. In Fr. Telamond we see a very obvious type of Telihard de Chardin and a tacit support for his heretical teachings on evolutionary theology. The only good part about Fr. Telamond is that he has some kind of brain hemorrhage and dies just over half way through the movie.
Finally, the method that Pope Kiril uses to solve the Russian-Chinese crisis is utterly stupid: in order to feed the billion or so starving Chinese, he comes up with the brilliant solution of selling all of the artistic treasures of the Vatican in order to raise money to feed them. Well, isn't that nice! But there are a few problems (1) Even if he sold the Vatican treasures for billions of dollars, that would only be enough to feed the billions of Chinese for about a month. (2) Even if he could feed them, it wouldn't solve the fundamental socio-economic crisis that caused the famine and they would likely be starving again very soon (3) Even if he did try to sell all the Vatican treasures, it would probably take years before the details of the transactions were complete (nobody makes billion dollar deals too quickly!) and the movie portrays the starvation crisis as one that must be solved urgently. In reality, the Chinese would be long dead and WWIII broken out before the Pope found a buyer for the treasures of the Vatican.
In this movie, we see a version of what Hollywood would like the pope to be: a diplomat who cares nothing for Church Tradition and tacitly permits the teaching of theological-evolutionary heresy. The funny thing is the same people who want the pope to be a diplomat when it comes to matters of establishing world peace and ending world hunger are the same ones who want him to stay out of diplomacy when it comes to right to life issues. Bottom line: "The Shoes of the Fisherman" is an awful movie.
"The Shoes of the Fisherman" Facts:
The movie was based on the 1963 best selling book by Morris West.
The character of Pope Kiril was based on the Ukrainian Catholic Cardinal Josef Slipyj.
Critics said the direction of the film by Michael Anderson was "dull and uninspiring."
Author Morris West wrote the screenplay but was so disappointed by the results that he asked that his name be deleted from that credit, while keeping his novel's source credit onscreen.
Casting Quinn in the lead as the man who became the leader of the Church occasioned some laughter among wags who dubbed this movie "Zorba, the Pope."
The picture cost nearly $9 million and (Despite its nominations for several awards) failed at the box office.
A replica of the Sistine Chapel was built in California, then sent to Rome because commercial movie companies are not allowed to get too close to the Vatican.
In closing, this movie is terrible and gets no papal tiaras; in fact, it gets the flaming cow fart: 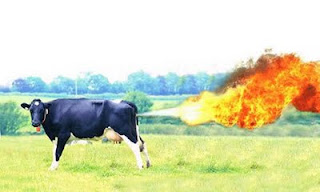 Labels: Culture, Democratization of the Church

Perhaps you and your bride will be better entertained next time by watching "The Third Miracle" with Ed Harris.

Quite different. It studies the canonization process through the eyes of a troubled priest (Harris), and a "devil's advocate" cardinal. More a drama, than a Catholic film on traditions, but still better than most secular films.

You might want to read the book after seeing the movie. Although some elements are the same (the evolutionary theology stuff) I don't think it is quite as bad as wearing suits to audiences. I read it two or three years ago now so it isn't the clearest.

If you want to see a much better film with Sir John Gielgud playing the pope, watch The Scarlet and the Black.

All three do excellent work.

The film's score is a bit dated, but outside of that, it's still a very riveting piece of film.

The screenplay of The Shoes of the Fisherman was written by Scottish writer James Kennaway, author of such haunting novels as Tunes of Glory and Household Ghosts. Kennaway had a difficult assignment. Morris West said there are ideas in his novels which do not translate well on to the screen. It's a pity serious film makers have never tried to adapt the fiction of J.F. Powers for the screen. Powers understood the lonely struggles and small epiphanies in the lives of Catholic priests and laity in America. One novel of Flannery O'Connor's, Wise Blood, has been filmed. Frank O'Connor wrote many fine stories about Irish priests which have been collected in one volume. Unlike Powers, Frank O'Connor was not devout but he understood his fellow Corkmen. Michel Piccoli portrayed a highly strung and humble Pontiff in the recent Italian film, We Have a Pope. Very funny but respectful of the faith. (Jack Haggerty, Glasgow, United Kingdom.)