Here are some of my favorite pictures from a recently concluded week long trip to Rome (with a day trip to Orvieto) in no particular order. 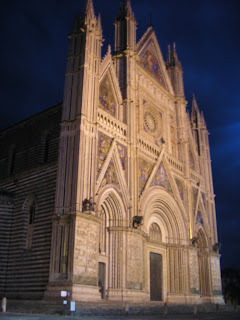 First up, Il Duomo - the centerpeice of Orvieto built to house the corporal stained with the Blood of Christ from the eucharistic miracle of nearby Bolsena in 1263 (said to have inspired the feast of Corpus Christi instituted for the universal Church in 1264). The facade is a masterpeice of mosaic, surely one of the most beautiful in Italy, perhaps in the world. 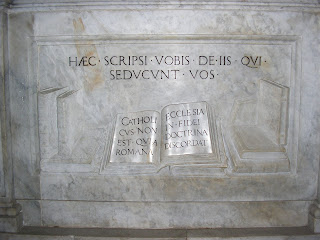 Next is a shot of a memorial to Card. Stanislaus Hosius in Santa Maria in Trastevere. Card. Hosius (Catholic Encyclopedia) was a leading figure at the Council of Trent and the leader of the Polish episcopate's fight against Protestantism in the 16th century. The inscription is pointed and succinct. 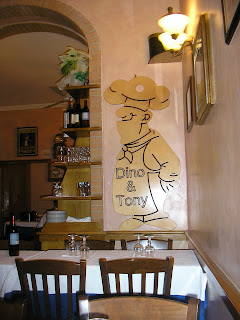 This is the interior of the best restaurant in Rome (perhaps in the world). When in Rome my wife and I eat bread/cheese/fruit and drink wine from the grocery stores as often as possible in order to afford a few good meals at this place. 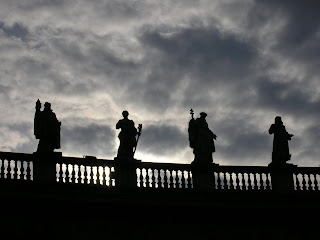 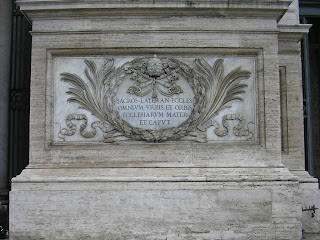 Detail from the columns of St. John Lateran, the Cathedral of Rome. "The Holy Lateran Church Mother and Head of All the Churches of the City and of the World." 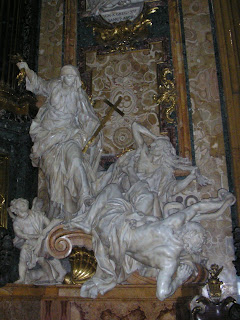 Next to the altar of St. Ignatius in the church dedicated to the Most Holy Name of Jesus (Chiesa Gesu), the headquarters of the Jesuits in Rome, is this piece entitled, "Religion Triumphs over Heresy," in which religion personified thrashes a couple of heretics (Protestants) while a child rips the pages out of their heretical books.
Posted by Anselm at 11:06 AM