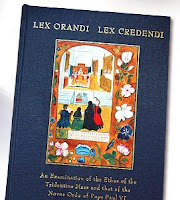 I finished reading yesterday a Christmas present from my father-in-law entitled Lex Orandi Lex Credendi: An Examination of the Ethos of the Tridentine Mass and that of the Novus Ordo of Pope Paul VI by John Wetherell. The book, as you can see, is physically beautiful; it is published by the newly established Saint Joan Press, which describes itself as "a traditional Catholic publishing house producing high quality hardback books at affordable prices." If this book is any indications, there are good things to come. I found particularly interesting the third appendix, which catalogues some of the major differences between the Traditional Latin Mass [TLM] and Novus Ordo Missae [NOM] while showing at the same time the disconcerting similarities between the latter and Thomas Cranmer's 1549 communion service. Below are abour half of the comparisons made by the author.
TLM: Entitled "The Mass".
NOM: Cranmer entitled his 1549 service: "The Supper of the Lord and the Holy Communion commonly called the Mass". The Novus Ordo Missae was entitled "The Lord's Supper or Mass" in the original Article 7. The term "Lord's Supper" is still included in the revised Article 7.
TLM: Celebrated in Latin.
NOM: Cranmer's Lord's Supper celebrated in the vernacular. The Novus Ordo Missae celebrated in the vernacular.
TLM: Much of the Mass said inaudibly.
NOM: Cranmer's service one of public praise and thanksgiving and therefore said audibly, with the possible exception of the Offertory Prayers in a sung service. Novus Ordo Missae said audibly throughout.
TLM: Celebrated on an eastward-facing altar.
NOM: Cranmer's service celebrated on a table facing the people. Novus Ordo Missae celebrated on what is clearly intended to be a table facing the people.
TLM: The Psalm Judica me, unacceptable to Protestants in virtue of its reference to the "altar of God".
NOM: Suppressed by Cranmer. Suppressed in the Novus Ordo Missae.
TLM: Double Confiteor distinguishes between priest and people, which is unacceptable to Protestants, as is the invocation of the saints.
NOM: Cranmer changed and moved the position of the Confiteor. The double Confiteor has been suppressed in the Novus Ordo Missae, thus blurring the distinction between priest and people. A truncated Confiteor invoking the angels and saints is included as an option but other penitential rites containing no such invocation and thus completely acceptable to Protestants are provided.
TLM: The prayer Aufer a nobis evokes Old Testament sacrifice with its reference to the Holy of Holies which the High Priest entered to offer the blood of the sacrificial victim.
NOM: Suppressed in the Novus Ordo Missae.
TLM: The prayer Oramus te, Domine refers to the relics in the altar stone.
NOM: The use of an altar stone is no longer obligatory for movable altars or when Mass is celebrated outside a consecrated building. An altar stone is only "commended" for permanent altars (Institutio Generalis 265-6). The prayer has been suppressed in the Novus Ordo Missae.
TLM: Introit, Kyrie, Gloria, Collect, Epistle, Gospel, Creed.
NOM: Retained by Cranmer in 1549. Retained in Novus Ordo Missae.
TLM: The Offertory Prayers: Suscipe, sancta Pater Deus, qui humanae Offerimus tibi, Domine In Spiritu humilitatis Veni, sanctificator omnipotens Suscipe, sancta Trinitas.
NOM: Comparable prayers in the Sarum rite suppressed by Cranmer. All these prayers suppressed in the Novus Ordo Missae.
TLM: Orate fratres.
NOM: Suppressed by Cranmer and suppressed by the Consilium in the draft for the Missa Normativa. Restored as a result of pressure at the 1967 Synod in Rome.
TLM: Secret Prayers (Proper of the Mass).
NOM: These prayers often contain specifically sacrificial terminology. They were abolished by Cranmer but have been retained in the Novus Ordo Missae though frequently emasculated in the I.C.E.L. translations. As these prayers do not form part of the Ordinary they do not provide an obstacle to achieving an ecumenical Ordinary.
TLM: Sursum corda dialogue, Preface, Sanctus.
NOM: Retained by Cranmer. Retained in Novus Ordo Missae.
Posted by Anselm at 2:53 PM