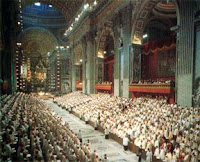 In an earlier post (here) I began to write about Volume 2 of Michael Davies' Liturgical Revolution series entitled Pope John's Council, in which the author provides a history of the event that was Vatican Council II by which (intentionally or not) the windows of the Church were thrown open to the smoke of Satan.
Blitzkrieg
Most of the bishops came to the Council without any clear idea of why they had been called there (there was after all no major crisis in the Church). But a group of liberal bishops and their periti from the Rhineland countries came with a definite plan and effected a veritable coup d'etat from the very first session.
"A Key aim of the European avant-garde (obsession might be a more accurate word) had been to replace the true concept of Catholic ecumenism, as laid down by Pope Pius XI in Mortalium Animos, with a policy of 'unity at any price.'"
At the first session (13 Oct 1962) the Rhine Group went immediately into action to obtain control of the ten conciliar commissions, which would mean effective control of the whole Council. The established method of voting was overthrown within the first fifteen minutes of the first session, and a new method, proposed by the Rhine Group was accepted.
Mopping Up
The new electoral procedures enabled the Rhine Group to campaign their own members in large numbers onto each and every commission. "Our first victory," according to one Dutch bishop. Before a single document is put on the table, the Rhine Group, whose numbers are now swelled thanks to bandwagon jumpers, is in control.
Liberal Shock Troops
The editor of the Tablet remarks: "For in a sense this Council has been the Council of the periti, silent in the aula, but so effective in the commissions and at bishops' ears." A single "expert" could, and often did, impose his views on the whole Council by gaining the ear of one or two of the German bishops. Prior to the Council Pope John initiated a two year effort undertaken by 871 scholars to prepare schemas for the Council that were totally orthodox and traditional. One Mgr. Marcel Lefebvre was a member of the Central Preparatory Commission giving him a unique vantage point in being able to assess both what the final documents say and what they don't say. Remember, Leo XIII determined Anglican Orders to be null and void based in part on what was removed from the ordinal.
"On 13 July 1962, Pope John decreed that the first seven preparatory schemas should be sent to the Council Fathers throughout the world. The first four were dogmatic constitutions entitled: 'Sources of Revelation" [note the plural! What we got instead was On Divine Revelation, or Dei Verbum], "Preserving Pure the Deposit of Faith", "Christian Moral Order", and "Chastity, Matrimony, the Family, and Virginity". The titles alone were sufficient to send any self-respecting liberal screaming to his psychiatrist! The fifth schema came into a very different category. It concerned the liturgy and had been prepared by a commission dominated by bishops and periti from the Rhine countries who had inserted their own ideas into it. The first four schemas were anathema to the liberals who resolved that they should not even be discussed."
Needless to say, they were successful in throwing out the hated shemas and beginning instead with the Constitution on the Liturgy which has come down to us as the first document of Vatican II. Now able to draft new documents the liberal periti are able to insert ambiguous formulas into them without the notice of most of the conservative bishops. The periti were then also able to take control of the post-conciliar commissions charged with interpreting and implementing the Council documents. One only has to think of the consilium headed by Bugnini...
The upshot of all this is that a handful of liberal "experts" who had the ears of the German bishops were able to draft the documents in such a way as to allow for multiple interpretations (the very definition of ambiguity!) and then the same men were given authority to act as the interpreters of these documents to the world!
Posted by Anselm at 9:47 AM

As I progress in my research into the 21 Councils of the Church and the Early Church Fathers and compare these with documents of the Church I will have a very clear idea at what point the "Traditions" were thrown out. It's pretty bad when the Protestants are more Catholic than the Catholics (and yes, this especially applies to the majority of our priests and bishops). If we aren't careful the Jehovah Witnesses will be more Catholic than the Catholics.

I wrote a lengthy paper on this in my senior year at Ave in which I read the exact records of the Vatican 2 daybooks (logues of what every bishop said at every meeting). I can say that your report here underestimates the intrigue and scheming of these Rhineland periti. It is amzing that such chicanery could go on at a Council, and this topic will never get hold.

Please comment on the issue of listing a singular source of divine revelation versus multiple sources.

If only there was some way to condense all the information into a short and easy to read/access book, tape, or something so that everyone can learn of this.

The only people I run into that know about these things are people that attend TLMs and such and that is still very few. Everyone else has no clue.

I wonder if more of this information got out about what happened during and after the council - clergy and laity alike - it would help to curve us away from all the negative effects of the council and perhaps even drop things that were adopted (like the so-called liturgical “reforms” for example).