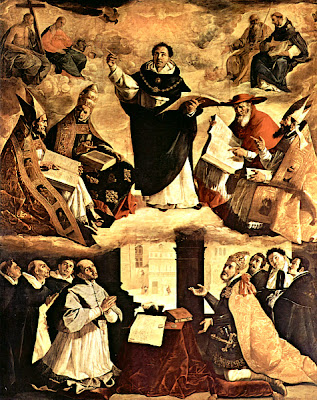 Today is the Feast of St. Thomas Aquinas, the Doctor Angelicus. Everything good that can be said about this great saint has already been said by somebody somewhere, and so I will not make any commentary upon him here, for it would surely fall short of the veneration due to such an important figure in the history of our Church. All I would say is that we ought to use this day to reread the 1879 Encyclical Aeterni Patris of Leo XIII on the restoration of Christian philosophy, which Leo sees entirely in terms of study and application of the methodology and principles of Aquinas. Our Church would be much better off if we were to adhere to Scholastic precision in what we say and do rather than in the gray, misty lands of post-Vatican II ambiguity.
The following is one of my favorite quotes from G.K. Chesterton and comes not from his work on Aquinas, but from the introduction to his book Heretics, in which Chesterton talks about the tremendous disadvantage the modern world has put itself at by disregarding the patient pedagogical method of Scholasticism:
Suppose that a great commotion arises in the street about something, let us say a lamp-post, which many influential persons desire to pull down. A grey-clad monk, who is the spirit of the Middle Ages, is approached upon the matter, and begins to say, in the arid manner of the Schoolmen, "Let us first of all consider, my brethren, the value of Light. If Light be in itself good--" At this point he is somewhat excusably knocked down. All the people make a rush for the lamp-post, the lamp-post is down in ten minutes, and they go about congratulating each other on their unmediaeval practicality. But as things go on they do not work out so easily. Some people have pulled the lamp-post down because they wanted the electric light; some because they wanted old iron; some because they wanted darkness, because their deeds were evil. Some thought it not enough of a lamp-post, some too much; some acted because they wanted to smash municipal machinery; some because they wanted to smash something. And there is war in the night, no man knowing whom he strikes. So, gradually and inevitably, to-day, to-morrow, or the next day, there comes back the conviction that the monk was right after all, and that all depends on what is the philosophy of Light. Only what we might have discussed under the gas-lamp, we now must discuss in the dark.
Posted by Boniface at 11:58 AM

Sorry to all, I've been preoccupied lately. I love the story of the lamp post. If we look around us we can see this same situation being played out within our own Church. Catholics who fit the people and those who speak of the Truth as the monk. Now I don't isolate the people to just the laity, but include the priest, bishops and cardinals. The only one within the Church who stands for some form of truth today is our Pope and a handful of bishops, priest and laity around the world. Not a good percentage. Let all of us evaluate ourselves and look inside to see who we are, the people or the monk. If you're the people then return to the Truth, if the monk, continue saying the Truth, if you're in between then think of what our Lord said about what he does to those who are lukewarm. As we used to say in a time over 30 years ago, in a war no one wanted, "pick a side."