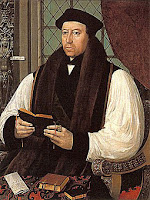 In part 1, we were looking at various examples of differences between the Traditional Latin Mass and Pope Paul VI's Novus Ordo Missae, noting especially the disconcerting similarities between the changes made by the Protestant Reformer Thomas Cranmer in England and those made by the post-Vatican II Consilium charged with implementing Sacrosanctum concilium (Decree on the Sacred Liturgy).
From Appendix III of John Wetherell's Lex Orandi Lex Credendi: An Examination of the Ethos of the Tridentine Mass and that of the Novus Ordo of Pope Paul VI.
TLM: Roman Canon.
NOM: Abolished by Cranmer. Retained as an option in the Novus Ordo Missae, which also contains a Canon (Eucharistic Prayer II) which some Protestants consider acceptable. It makes no distinction between priest and people and does not include the word "Hostia" (victim).
TLM: The Consecration formula.
NOM: This was considerably modified by Cranmer, if indeed there was a consecration, and the Novus Ordo Missae has incorporated his most important modifications.
TLM: The prayer Libera nos after the Pater noster.
NOM: Luther and Cranmer abolished this prayer, owing to the invocation of saints at its conclusion. A modified version has been retained in the Novus Ordo Missae with no invocation of saints.
TLM: Haec commixtio.
NOM: A version of this prayer in the Sarum Missal was abolished by Cranmer. A modified version of the prayer has been retained in the Novus Ordo Missae but with the significant omission of the word "consecratio."
TLM: Domine Jesu Christe, qui dixisti.
NOM: This prayer did not occur in the Sarum rite but contains nothing to which a Protestant could object beyond the words "ne respicias peccata mea" in which the priest asks forgiveness for his personal sins. This is another prayer distinguishing between the priest and layman, and in the Novus Ordo Missae "peccata mea" has been changed to "peccata nostra" - "our sins."
TLM: Domine Jesu Christi, Fili Dei and Perceptio Corporis tui.
NOM: Modified versions of these prayers are included in the Novus Ordo Missae, one of which the priest says in his personal capacity before Communion. It is a matter for some satisfaction that such a prayer is included. Too much significance should not be attached to the use of realistic language regarding the Real Presence in these prayers. It was primarily sacrificial language which the Reformers wished to eliminate. They were able to reconcile the use of language apparently expressing belief in the Real Presence with the own theories.
TLM: The Communion Rite (a) Communion given to the laity under one kind.
NOM: (a) Communion given under both kinds in Cranmer's service. The occasions when this is done in the Novus Ordo Missae are multiplying. It is permitted at all Sunday Masses.
TLM: (b) Traditional style altar breads.
NOM: (b) the relevant rubric in Cranmer's 1549 rite states that altar breads should be: "unleavened, and round, as it was before, but without all manner of print, and something more larger and thicker than it was, so that it may be aptly divided in two pieces, at the least, or more by the discretion of the minister". Article 283 of the General Instruction reads: "Bread used for the Eucharist, even though unleavened and of the traditional shape, ought to be made in such a way that the priest, when celebrating with a congregation, can break it into pieces and distribute these to at least some of the faithful".
TLM: (c) The Host is placed on the tongue of the kneeling communicant by a priest.
NOM: (c) Cranmer retained all three traditional practices in his 1549 rite, but in the 1552 rite Communion was given in the hand to signify that the bread was ordinary bread and the priest did not differ in essence from a layman. Communion is now given in the hand in almost every Western country but the Novus Ordo Missae has out-Cranmered Cranmer [!] by allowing communicants to stand and receive from a lay minister.
TLM: Quod ore sumpsimus and Corpus tuum.
NOM: These prayers so not refer to sacrifice, but their explicit references to the Real Presence would not commend them to Protestants although Luther felt able to retain them owing to his theory of consubstantiation. The first was not in the Sarum rite, the second was, and Cranmer suppressed it. Both have been suppressed in the Novus Ordo Missae.
TLM: Placeat tibi.
NOM: The Placeat tibi was a bête noire for Protestants. This prayer alone would have rendered the Novus Ordo Missae unacceptable to them had it been retained. Following the example of Luther, Cranmer, and other Reformers, the Consilium suppressed this prayer.
TLM: Last Gospel.
NOM: There is nothing in the Last Gospel incompatible with Protestantism but its retention in the Novus Ordo Missae would have clashed with the pattern of Protestant Communion services which conclude with a blessing. The Consilium suppressed it.
All due credit for the above goes, as I mentioned, to John Wetherell and is taken from his book Lex Orandi Lex Credendi. It is a useful exercise to go back through this lengthy (but far from complete!) list of changes made to the Mass and ask oneself: Did the good of the Church genuinely [!] and certainly [!] require [!] this innovation? Vatican II stipulated after all that "there must be no innovations unless the good of the Church genuinely and certainly requires them" (Sacrosanctum concilium, 23).
Posted by Anselm at 3:26 AM

Excellent series of posts, Anselm. The part about the Novus Ordo out-Cranmering Cranmer is would be funny if it wasn't so serious.