Revision of the Good Friday Prayers 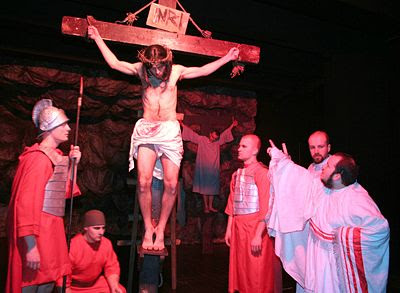 Ever since Il Giornale released the rumor that Pope Benedict will be altering the prayer for the conversion of the Jews in the traditional Good Friday liturgy, a wave of speculation and discontent has swept across the traditionalist blogosphere, and I'd like to put my two cents in on the issue. But before I discuss it, let's keep something in mind: this is merely a rumor at this time, and it is entirely possible that it may be on the same level with those who say that one day the Church will allow contraception, ordain women, approve Medjugorje. These are all things that will never happen, but many talk as if they are right around the corner. It is certainly possible that this could be the case.


Then again, this may in fact be true. Many of us recall in June that the date of the motu proprio's release, the first words of it as well as parts of the explanatory letter were all leaked beforehand, and all this turned out to be accurate information. This rumor about the Good Friday prayers being changed may in fact be true.


Three thoughts on the issue: first, the Good Friday prayers are taken directly from the writings of St. Paul (2 Cor. 3:13-16). When people accuse the texts and prayers of the Church are being anti-Semitic, often times they are veiled attacks against the authority and authenticity of the Scriptures themselves. In 2 Corinthians 3, St. Paul says:


We are not like Moses, who would put a veil over his face to keep the Israelites from gazing at it while the radiance was fading away. But their minds were made dull, for to this day the same veil remains when the old covenant is read. It has not been removed, because only in Christ is it taken away. Even to this day when Moses is read, a veil covers their hearts. 1But whenever anyone turns to the Lord, the veil is taken away.


Let us pray also for the Jews: that almighty God may remove the veil from their hearts; so that they too may acknowledge Jesus Christ our Lord. Let us pray. Let us kneel. Arise. Almighty and eternal God, who dost not exclude from thy mercy the Jews also: hear our prayers, which we offer for the blindness of that people; that acknowledging the light of thy Truth, which is Christ, they may be delivered from their darkness. Through the same Lord Jesus Christ, who lives and reigns with thee in the unity of the Holy Spirit, God, for ever and ever. Amen.


All of these things, the blinding and veiling of the Jews as well as the prayer for their conversion, come straight from Scripture. As we have seen above, the section of the veiling of the Jewish mind comes from 2 Corinthians 3:13-16, and the prayer for their conversion is found throughout the New Testament, but is explicitly laid down in Romans 10:1: "Brothers, my heart's desire and prayer to God on their behalf is for salvation." So, if somebody says the Good Friday prayer is anti-Semitic, it is St. Paul whom they are accusing of anti-semitism, and the argument shifts to another plane.


Second, I'm sorry that the Jews are offended that we pray for their conversion, but it is in fact a charitable and righteous thing to do. Do we want all people to be saved or don't we? Do we still believe that, as Acts 4:12 says of Christ, There is no salvation through anyone else, nor is there any other name under heaven given to the human race by which we are to be saved? Do we still take Christ's commandment seriously to preach the Gospel to all men? Of course people are going to be offended when we preach the truth to them! Christ promised as much to His very first disciples. But that is the very nature of the Gospel, to be a "stone of stumbling, and a rock of offence, even to them which stumble at the word" (1 Pet. 2:8). Of course a Jew or pagan or Muslim is going to be upset when you let them know that their religion does not show them the true way to the Father. The Jews were scandalized when Christ told this to them 2,000 years ago. Nobody likes to be told that they are wrong (and of course, there is more to evangelization than just telling people they are wrong), but sometimes it must be done. The Scripture says in proverbs 13:24 that He who spares his rod hates his son, and the same is true of evangelization: if we spare them the Word of Truth, then all our talk about love is an empty sham. If we don't tell them the Gospel, then we gate them, for the Gospel brings us to the One Who is Life. This scandalized the Jews of Jesus' day, and it makes sense that it would today.


Third, if in fact the Pope does alter this prayer, I think it is very hypocritical. Nevermind that the prayer has already been altered several times since 1955, but even so, consider this: does it make sense to give us back the Traditional Latin Mass because you deplore a lack of continuity with Tradition and call the Novus Ordo is a "banal, on the spot production," and then go ahead and arbitrarily alter the prayers of the old Mass, giving us an "on the spot" Good Friday prayer? I thought the whole point of adhering to Tradition was the emphasis that the Church does not change with the spirit of the times? What could be more in keeping with the spirit of the times than altering the traditional Good Friday prayer to appease the worshippers at the altar of political correctness?


Newsflash: We want the Jews to convert. We want Muslims to convert. We want Hindus to convert. Did we forget our mandate? It is this: that every single human creature on this planet becomes a Catholic. After all, they all are in heaven. Let's stop apologizing. Are we trying to win souls or make friends? Our "friends" won't think very highly of us when they are in hell because we didn't tell them the truth.


So, to sum up my three thoughts here (1) Attacking the Good Friday prayers is actually attacking the Scriptures themselves and accusing them of being anti-Semitic, because the prayers come from the Scriptures (2) It is a charitable thing to want the Jews to convert, and (3) it is hypocritical to support Tradition and continuity only when it doesn't offend against the spirit of the times.
Posted by Boniface at 8:55 PM

I've written two posts on my blog about Judaism recently: one on the displeasure over the terms "Old Testament" and "New Testament", and the other on an America article about the 1962 prayer.

I'm reserving judgment until I hear what the truth of the matter is, and what language is used if the prayer is changed. I've already pointed out the Scriptural support for the language of the prayer as it stands, and the true charity displayed by praying for the conversion of the Jews to Christ without equivocation.

I only wish to add one thing: Those
who feel that the entire New Testament
is somehow 'anti-semitic', or that
the Words of Saint Paul are somehow
'anti-semitic' -- should then take a
good, hard look at the *Old* Testament.

If all it takes to be 'anti-semitic'
these days is to string together a
few unflattering words about the Jews,
then I'm afraid that most people who
think like this are going to be in for
a *huge* disappointment once they read
the Old Testament.

The Holy Bible simply isn't 'just
another book'. It is the Eternal Word
of God; and God is not 'anti-semitic'.

Now now, let's all remember that we live in a politically correct society. We aren't supposed to offend others regardless of the truth. Probably why I'm in trouble all the time. I've been told I have no tact, no diplomacy and no political correctness. As I've always said, the TRUTH is the TRUTH. It doesn't have to be politically correct.