The worst Mass ever?

Today we have several candidates vying for the dubious title of being the worst Mass ever. Who will win? First, we have these photos from a Mass in France: 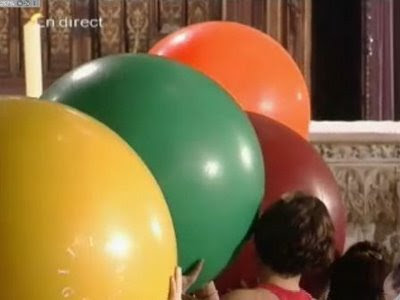 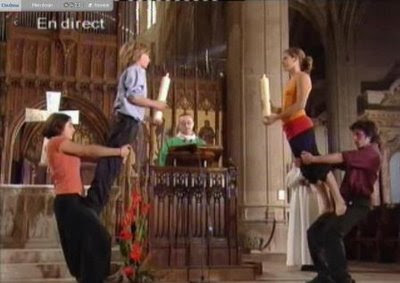 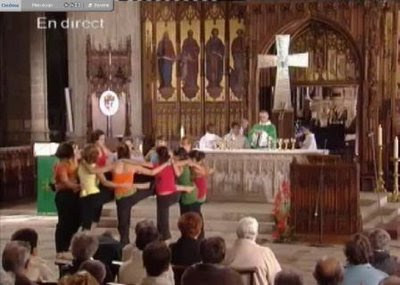 Then, there's this communion service led by clowns:

Then, perhaps not the worst Mass ever, but certainly still terrible, is Bishop Tod Brown of Orange County California denying Holy Communion to a woman just because she decided to reverence the Lord. It happens around 20 seconds into the scene, after which the Bishop grabs are by the arms and compels her to stand up.

Of this scene, the woman later said: "I was sitting on the side of the Church, 3rd row, where Bishop Tod Brown distributed the Holy Eucharist, (in the video, I am the woman with short brown hair and glasses, wearing a black sweater and long white skirt sitting on the opposite side (from the camera) of the aisle in the center of the church) and upon approaching the Bishop to receive, I genuflected, out of reverence for the Sacred Species and remained on one knee to receive the Blessed Sacrament. Bishop Brown refused to give me Holy Communion. Bishop Brown said, "You need to stand up."

I was in shock and didn't move or respond. He then reached out and took hold of my folded hands, attempting to physically pull me to a standing position, and said more sternly, "You need to stand."

I looked up and whispered, quietly and respectfully, "Please, bishop", and he then grabbed my arm, and pulled me, as though to physically pull me up to a standing position (although obscured, you can see where he bends down and extends his right arm to grab mine) as he stated more loudly, "Get up".Still on one knee, I then asked very quietly and with genuine ignorance, "Why?"As he stood up straight he responded, very loudly and sternly, "Because THAT'S the way we receive communion. Now, GET UP, you're causing a scene.'"

Here's another snippet from Bishop Tod Brown's Diocese of Orange County, including a homily given by a member of the teen band at a "Teen Mass."

Why a return to Tradition is sorely needed.

Clowns are a theme.... I wonder why

and then there are liturgical "abuses"


But this video is what is true:

Oh the autrocities of all this. Makes my work so much more difficult. A shepherd leading the flock over a cliff to death. This is more painful than my hip surgery. It's like getting an impacted wisdom tooth pulled with novacaine. It's like taking a hammer and hitting your thumb, twice.

Why are these things allowed? Because Satan has fully infiltrated the ranks. The few who fight are loosing battles. But the war isn't over yet.

Remember the Pharisees. Remember Sodom and Gahmorrah, remember the predictions of Fatima and what happened to Poland when she refused the Divine Mercy (St Faustina died in 1938, what happened next?). Let's hope God's wrath will not be overwhelming, that His Mercy will be there.

I think I'm going to be sick.