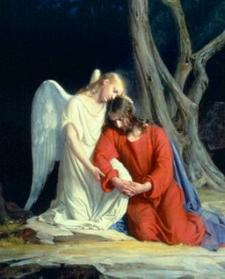 In all the ecumenical dialogue that has occured in the past 40 years, there is endless emphasis on what Protestants and Catholics share in common and in being able to unite and gather around the dogmas that we do hold in common. One of these doctrines that Catholics and Protestants supposedly agree on is the atoning death of Christ on the cross for the sins of mankind. This is all well and good, until we stop and ask what each side means when it refers to Christ's atoning death. This is of paramount importance. For example, if you ask Mormon missionaries, they will say that they believe in the Holy Trinity. However, according to LDS, the Trinity refers to a triumvirate of three separate gods, one called the Father, one called the Son and one called the Holy Ghost. Mormons are quite adept at using orthodox words but attaching different definitions to them.

As the beginning of any enquiry or discussion between two diverging parties ought to begin with a definition of terms, we ought to look at what Protestants mean when they talk about Christ's atoning death on the cross (leaving a little bit of wiggle room of course for the fact that not all Protestants believe alike; in fact, you are hard pressed to find even two who do). Anselm has already delved into this topic quite a bit, but a little more couldn't hurt.
The essence of Protestant soteriology is this: that Christ took our place on the cross.We deserved punishment for our many sins, and Christ stepped in between us and God and took the full measure of God's wrath that we justly merited. After God had expended all of His wrath, He had no more left for us and thus we can be saved because Christ took the punishment that was ours. In a sense, when we sin, God wants to punish us, but we say, "Don't do it God! Remember, You took ou all of Your wrath on Christ!" Then God looks at Jesus and remembers that He took our punishment and we get off scot-free with no reprecussions whatsoever.Remember this famous quote from Luther:
Sin cannot tear you away from him [Christ], even though you commit adultery a hundred times a day and commit as many murders (Luther to Melancthon, no. 99, 1521).
For Luther, sin bears virtually no reprecussions for the sinner because Christ has taken all the punishment. Therefore, there is no need for penance, perseverance (certainly not Purgatory) and struggle against sin. All the believer need do is realize that Christ has paid the price for him in full and he is thereby justified with no consequences remaining whatsoever.
This is very far from the Catholic belief, or I should say, from the official Catholic belief, because as Anselm has demonstrated in his post linked above, many Catholics (even some apologists) seem to hold the Lutheran penal-substitution view of the atonement. This view is contrary to Catholic teaching and contrary to reason for a view reasons.
The biggest problem is that the penalty due to sin is eternal separation from God. Because Christ is the Second Person of the Blessed Trinity, He always enjoys the beatific vision and cannot be separated from God. It would be easier to tear apart the binding fabric of the cosmos that for Christ to be separated from God, even more so for the Father to turn His back on Christ, as some Protestants put it.
But, perhaps you will say, Christ could endure eternal separation from God becaus He is an infinite, divine Person. Let's put it this way: what is the difference between a finite being suffering infinite punishment or an infinite Man suffering finite punishment? Since Christ is infinite, He could subsume in Himself in a temporal timespan of a few hours the sum total of pains of eternal separation from God. Perhaps we can solve the difficulty this way?
It is a novel argument, but I think it fails because of this: the pain of eternal separation from God, the pains of hell, are primarily a pain of loss, and only secondarily a pain of sense. No matter how intense Christ's pains were, they cannot be the pain of loss, which is the pain of exclusion from God's presence with the knowledge that it could have been prevented. It implies reprobation, and we come back to the same dilemma: God the Father turning His back on Christ and Christ being separated from Him. Since this is impossible, we know therefore that Christ cannot have endured our punishment for sin. Not because there was too much sin and punishment for Him to bear (God forbid!), but because our punishment differs not just in degree but in kind. Christ can never suffer the punishment due to a sinner in this sense because a sinner's punishment always involves exclusion from God's presence and loss of grace. If we assert the Protestant view, we end up with the absurd notion that He who was the fullness of grace fell from grace and that He Who is in the bosom of the Father was actually excluded from Him. Sounds more like Lucifer than Christ.
There are other differences between the Catholic and Protestant views on the matter, but this should suffice to demonstrate that we do not believe the same thing. For the Catholic, Christ's sufferings are not the essential focus but the perfection of His offering. It is noty simply the fact that Christ suffered, but that the One who suffered was a perfect sacrifice. The Catholic is not mired in the difficulties of trying to equate Christ's sufferings with our own because we understand that they are of a completely different nature. We need to think a little bit harder about what we are uniting around before we go ahead to assert that we all believe the same thing.
Posted by Boniface at 12:12 PM

May I point out, that although per the U.S. Government the Mormons are a Religious group but by true definition they are considered a cult.

On the point about Protestant belief? Listen around you and you will hear Catholics (and I use the title loosely) saying almost the same.

When will people listen and hear the real Truth? I hope they don't wait until His coming. It will be too late then. For when that time comes it will be judgement, not a Q&A session.

The essence .....: that Christ took our place on the cross,...stepped in ...and God and took the full measure of God's wrath ... ... and thus we can be saved because Christ took the punishment that was ours.

So either there is no one in hell (as at least one "Catholic" theologian has considered...... or at least I can murder and commit adultry and not have to pay the price.

After all, the punishment is eternity in hell.... for someone. And I don't have to pay.

But then, that is what happens with the "theory" of limited atonement and what really happened at the Cross.