Does the devil hate latin? 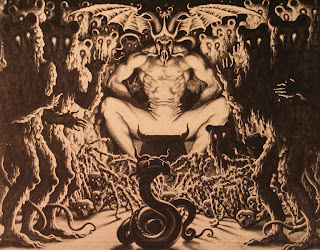 Many Trads are familiar with the following phrase: "Don't worry, the devil hates Latin, too." It is a humorous little jab at those who in the past four decades have effectively pushed for the de facto outlawing of Latin in the Latin Rite and have treated those who adhere to the Church's perennial and universal language as reactionary inquisitors from a bygone age. But, beyond the obvious implication in the statement (that those who want to do away with Latin are in league with the devil), we must ask ourselves, does the devil really hate Latin?


I have seen some interesting articles on the fact that Latin, when used in exorcism rites, seems to upset the demons more than the vernacular. I guess there are some theological reasons why the devil would be opposed to Latin, but the fact of the matter is that we have no way of knowing what Satan really thinks about the issue. However, while doing some research on Satanism recently, I found out some interesting things about what the Church of Satan does.
The Church of Satan, founded by Antony LaVey in the 1960's, uses for its service a parody of the Catholic Mass called the black mass. For many years, the black mass was a combination of English, Latin and French (the first black mass called the Missa Solemnis was promulgated in 1970). This earliest black mass used several Latin phrases, such as "In nomine Domini Dei nostri Satanae Luciferi Excelsi." What is more interesting is that in 1986, the Church of Satan promulgated a new order of the black mass called the Missa Niger which is done entirely in Latin. That's right, the Church of Satan does their liturgy entirely in Latin! The mass ends with the words, "Ave Satanas!" and inversion of Christ's words to Satan in Matthew 4:10 ("Vade, Satanas!). Apparently, the devil does not hate Latin as much as we thought!
This is in fact a backhanded compliment to Latin. The devil does not imitate false things: he imitates true things, so as to more easily deceive people. There is no "black praise and worship service to Satan" based on Protestant models, but there is a black mass, which is a parody of the Catholic Mass, because the devil only apes that which has some substance to it. The fact that the Satanists value Latin ought to show us that there is true power in a Latin liturgy, otherwise the devil would not want to make use of it.
Interestingly enough, the Wikipedia article on Satanism makes the following observation regarding desecration of hosts:
Given the modern practices of the Latin Rite of the Catholic Church, which permits parishioners to receive the host in the hand, it is possible to steal a host in that manner. Though priests and eucharistic ministers are cautioned to be on the look out for persons who do not immediately consume the host, there are usually too many parishioners at any given Mass or Communion Service to ensure that no hosts are stolen in this manner.

A fascination with the occult, with Satan, with the things not of Christ is too strong to be taken lightly.

It should be sadly amazing how many people (especially the young) have weak minds which thrive on these forms of evil....... but when we look at how many leave the Church for various forms of "easy-believism" that number far surpasses the "Black-Mass" proponents.

True strength comes from Christ alone, and from the Mass which reveres Him which must be protected for the "monument" it is (per Fr. Ripperger's insight).

It is said (Fr Hardon, Fr Corapi, etc) that each of the angels have special talents. Lucifer's includes the use of music. No wonder there is music like that from Black Sabbath, etc that has perverted our young.

Please Lord, let their be a resurgence of Chant, of Latin, of vertical reverance.

I agree with Mr S. It is a tragedy that Latin is used by Satanists and not by the Church that originally used it. If you look at what is said and done in the black mass, you'll see that essentially the Latin is used to invoke the opposite of the Catholic Church. This becomes, then, a lie which we all know Satan is very capable of. In this form he may tolerate the latin. But, per the Exorcist that was interviewed at the Vatican not to long ago (and his name escapes me) Latin prayer used as Catholics use it is very effective against Satan. Look at St Benedicts medal and what the letters mean, in Latin, to drive off Satan.

Vatican II itself dictated that the Latin will be preserved. Where did it go? Ask the bishops. Jesus admonished the "priests" of the Jews for the same violation of the faith. In fact, Paul makes a statement on this in his 2nd letter to Timothy, ch4:1-5 or 6. Who is our shepherd? Apparently WE don't really have one if we rely on the bishops. Oh, yes, there are a few that may be still around that have kept the faith, but the majority are shepherds who lead the flock astray.

The Pope? Well, for me he is the only one I will listen to. And only in his teaching. It is very sad when one can no longer trust the words of those who are supposed to be shepherds. High level philosophy, distortion of translation, changing words and rites to adapt to what they want all the work of Satan. Now I ask you. When we prayed in Latin, and I mean really prayed not mimick the words, was the widespread abuse of our Faith evident? Did the Satanists make a more vocal and open appearance to the public (remember Black Sabath?). Was there more open verbal attacks on the Church for its Faith? I remember these things. Why don't we hear them today? I tell you, it's because Satan is way ahead of us and is winning more souls than we can imagine. Why do you think Jesus wanted the Divine Mercy Congregation and the prayers and the feast? Why does he call us to pray? Why are there people who have no one to pray for them? The few that are left are over burdened but it is a cross that must be carried. Prayer for those known and unknown, keeping with the true and "pure" traditions of the Church, trying to teach and inform those of the need to follow the truth and to eliminate error and neglect. None of us are perfect, but there are those who ignore all for their own satisfaction. Paul states this clearly, and it is not just the people of the congregation but priests and bishops, as well.

I pray for all those I know and for those who have no one to pray for them. I am no better than any of you and probably less important, but I hope that my small and insignificant effort will help me when my time is up.

That the devil hates prayer in Latin and that the satanic "mass" is in Latin is no contradiction. Fr. Amorth does not state that the devil hates Latin itself, but that he hates *prayer* in Latin. Probably for the very reason you pointed out--he only apes things that have substance to them.

The church did not "originally" pray in latin. The church almost certainly originally prayed in Aramaic (perhaps with some very early congregations using Koine.)

There is nothing "magical" about a language being used. God responds to the cries of our hearts, in whatever language they reach him. Why would the Creator of the Universe care to designate one language as having primacy over the others?

It's not the language itself but the strength of the old blessings and verbiage used in those prayers. The Black Mass is said in Latin as the article says. So yes, the language is not "magical" the words used in the language are powerful.

It is not the language, it is the clarity. Latin doesn't change meaning. Vernacular does. Show a kid today the opening song of the flintstones and they will be questioning Fred's sexuality. Get an English man to ask if he can bum a fag in the bay area, and tell me English has any consistency. Latin is used in medicine and in law for the same reason the church used it for so long. It is precise and unchanging. Just as wearing professional clothes will alter the way you carry yourself and the way you act, so will use of latin affect your reverence. Jews STILL use Hebrew during their rituals. It connects them to the past. Latin connects us to the Church's past.