The Templar Knights were restored to the Church in 1979 under the name Christi Pauperum Militum Ordo, also known more simply as the Ordo Militiae Templi. It was founded in Siena and blessed by the Archbishop of that city (the current Cardinal Protector of the Militia is Édouard Gagnon). It was founded by Count Marcello Alberto Cristofani della Magione, who is also the current Grand Master.

The new Templars are faithful to the perennial traditions of the Church, and their members make the following committments: recite the traditional Divine Office daily in Latin, to recite the (traditional) Rosary daily in Latin, to assist the traditional Mass as frequently as possible, to study assiduously and live out the spirituality and culture of Christian chivalry, and, in general to invest our energies in the restoration of Catholic tradition. It is open to lay persons as well as ordained and religious.

After a two year novitiate, those found worthy to join the order travel to Castello della Magione near Siena where they are formally enrolled as a Knight (or a Dame, if you are a female). The order follows a modern adaptation of the original Templar rule written for the order by St. Bernard of Clairvaux. They observe the three evangelical counsels, as well as a fourth vow to publicly defend the faith. Their current members include hundreds of Knights in Obedience (lay persons), about 30 Knights with Solemn Profession, 10 national preceptories, many local priorates and scout groups. The headquarters of the order is in the Tuscan village of Poggibonsi, in an 11th century compoud that used to belong to the original Templars. The Tridentine Mass is celebrated there daily. 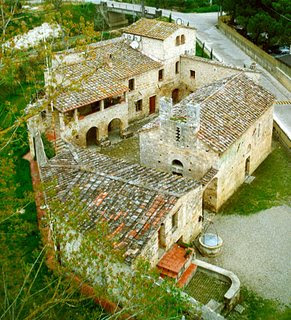 There are currently preceptories established in Italy, Australia, Austria, Canada, Germany, Switzerland, United Kingdom and Ireland, Poland, Romania, Hungary, Spain, United States of America, and Puerto Rico. The American contact for the order is Bro. Charles Adams, CPMO (he can be reached at this address: usa@ordo-militiae-templi.org. Fellow Traditionalist Francisco Romero Carrasquillo, from the excellent blog Ite ad Thomam, is a postulant in this order, and it is from him that I got much of this information. Please pray for him and his wife as they prepare to enter this more excellent Catholic order.

Check out the Templar's website here for more information.

I love learning about stuff like this, and I am glad to see that you are still finding time to post truly excellent material.

Thank you for this post. Just one correction: at present we do not allow anyone in the Clerical State to join us, although we do honor certain priests as chaplains to the Order. This is because of our official status as a Lay Association. If one of our members were to enter into the Clerical State, he would immediately cease to be a member of our Order. There is a desire in the Order to move beyond this, but there are certain obstacles at present which are proving difficult to overcome.

Please pray for our Order and for the repose of the Soul of our past Cardinal Protector, his Lordship Cardinal Gagnon, who passed away on 25 August, 2007.