Saints are mentally ill, according to "The View" 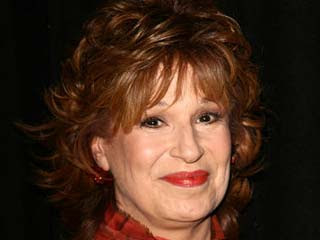 Joy Behar (above) from the decadent ABC show "The View" (which a FOX article properly refers to as a "daily chafest") came under scrutiny recently for her remarks that Catholic saints of the past were mentally ill. Here are the offending comments:
"I have a theory that you can’t find any saints anymore because of psychotropic medication. I think that [in] the old days, the saints were hearing voices and they didn’t have any Thorazine to calm them down," Behar said on ABC's daily chatfest. "Now that we have all of this medication available to us, you can’t find a saint anymore."
"That’s why Mother Teresa had issues. Let’s not forget, she didn’t really believe 100 percent like those saints who were hearing voices. She didn’t hear voices. So the church said ‘OK, she does good deeds. Let’s make her a saint.’ In the old days it used to be you heard voices. You can’t do that anymore."
Behar immediately came under scrutiny for the comments, which were deemed insensitive to Catholics and stupid from a historical standpoint. Fr. Jonathon Morris, contacted to comment on the remarks, said, "Clearly she is no church historian. Saying 'she didn't believe 100 percent' is a simplistic and superficial reading of the news," said Morris. "Why would you spend 60 years in a slum in the name of Jesus out of love for God if you don’t believe in Jesus or God 100 percent?"
Behar's spokespeople defended her, saying it was only a joke and protesting that Behar was a Catholic: "She said very clearly it was just a theory — she has lots of really funny theories that she kind of gives on a daily basis. She’s a Catholic, and she loves to talk about the Catholic Church. It’s one of her favorite subjects." This is the kind of stuff she says about "one of her favorite subjects?" I wonder what kind of drivel she says about something that is not one of her favorite subjects!
Apparently we ought to just forget about the whole thing because Behar said it was "only a joke." Oh, so if we are joking then it is okay? Let me ask you a question: did the media forgive Michael Richards when he insulted African Americans in his famous 2007 nightclub tirade? Was Mel Gibson simply forgiven by the establishment when he made some drunken anti-semitic remarks? No. In both cases, the offending persons were ostracized and their careers called into jeaopardy. Now, at least Gibson and Richards made their comments in a semi-private settings (to a police man, and in a small night club). Neither Richards nor Gibson knew that the population at large would find out about their comments. But Behar makes these comments on national television, knowing she is being heard by millions of viewers! And she just wants to say, "I was only joking!" Did that cut it with Don Imus? He actually lost his job over his slip of the tongue. Protesting that it was meant in good humour did not help him.
The sad thing is, people will simply forget about this. Anti-Catholicism is the only socially acceptable form of discrimination left in America, and this is another example of it.

Please take our survey above regarding what should become of Joy Behar.
Posted by Boniface at 11:49 AM

Ms. Behar is no Catholic. She may have been baptized a Catholic, may have even attended Catholic grade school - or not - may have even had a Catholic first wedding. She has since then divorced, does not attend Mass or the sacraments, has lived with her Jewish "boyfriend" for 25 years,and makes fun of Catholicism or its crises at any possible self-promoting moment.

She claims to be Catholic, oh wait - that must be the small "c" catholic.

someone needs to smack her to clear her head

This is nothing new. Fr. Benedict Groeschel, the beloved Franciscan (of the Renewal) from EWTN, who has a show that brags of his "wisdom" says that St. Joseph Labre was mentally ill. This is a dangerous road to go down, because it is easy to accuse anyone who lives differently from the world as being mentally ill. Fr. Groeschel is enamored of modern psychology, and has been led astray to that extent.