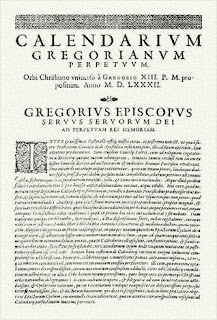 How many of you out there who love our Lord and look to the Incarnation as the center of human history have been outraged by the sly and insidious substitution of C.E. and B.C.E. (Common Era and Before Common Era) in place of the traditional B.C. and A.D. (Before Christ and Anno Domini)? The CE/BCE usage is getting ever more common in secular circles and it is even gaining ground among Christians for some reason I can't fathom.

PR and PR for pre and post Reformation? Great for the protestant brethren with the mindset that they have always been the true church.

BAA and AAA for before and after Allah Akbar. After all, the muslims do believe that we (Jesus too) are all born muslim. And the BAA would remind us of Muhammed's sheep-flocking days, while the current crop of Islam would take great a(in)surance in everyone having AAA.

(sorry, just trying to be funny BC... before coffee)